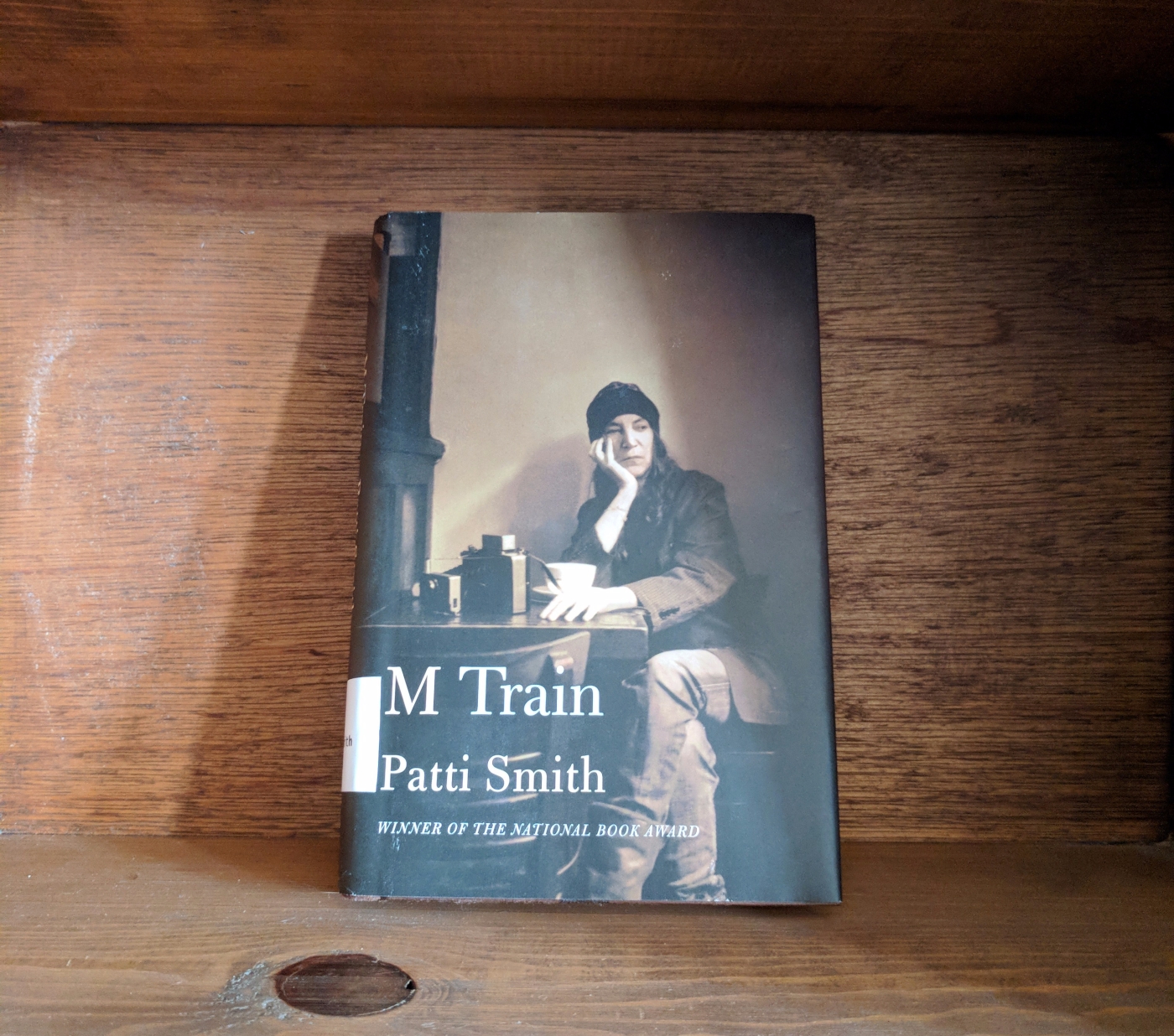 M Train by Patti Smith
254 pages
Published by Alfred A. Knopf, 2015
Genre: Essays, photography
Rating: 4.5 out of 5 stars
Re-readability: Reading any Patti Smith book is more about the experience than the plot, so I will definitely be coming back to this one.

It’s difficult to sell people on a book of essays, or loose chapters. It’s tough to describe to others what a book like M Train is “about.” The thing that Patti Smith writes about always seems secondary to the way in which she writes about it. “I’m sure I could write endlessly about nothing. If only I had nothing to say,” writes Smith.

The famous artist, performer, and writer has had a prolific career, between her photography work, her groundbreaking performances which melded rock and poetry, and her books. She also had what has now become a famous marriage with Fred Sonic Smith, an influential member of the band MC5.

In M Train, Smith weaves together some of her memories of trips with Fred and how they began their family. She also talks about her childhood and the way she lives now. Smith always seems to meet the most interesting people or get herself into the oddest of situations, like getting admitted into this secret society of people honoring Arctic explorer Alfred Wegener or getting to lay down on Frida Kahlo’s bed when she falls ill during a photoshoot.

While Smith includes some of the quirky aspects of her life, she also doesn’t hold back on the more mundane details either, which gave me a more genuine sense of who she is. She talked about how she tries to make lists when she packs for trips (even though she almost always brings the same things), how her cats sleep with her and sometimes throw up on the bed, where she goes to get coffee every day, etc. Those details made me feel like Smith was pulling back the curtain and giving me a glimpse into her life and her habits.

Smith is a thorough reader and loves to reference some of her favorite works, like 2666 by Robert Balano or Master and Margarita by Mikhail Bulgakov. She also becomes obsessed with Haruki Maurikami and she talks about how she discovered him and went on to read almost everything he’s ever written (which is exactly how I tend to react if I find an author I love—savoring is for chumps, right?). Any way, although I really appreciated and found her essays about her love of reading and her semi-analysis of those books fascinating, I think it might be tough to get into for anyone who hasn’t read those books. Just warning any prospective readers.

Smith described M Train as a “roadmap to her life.” I would certainly agree with that, but it also seems to be a roadmap to the way she thinks and how her experiences have all played a role in her thought processes, especially as a writer.

In some respects, she keeps her writing simple but she reels off these adages that have a habit of staying with you: “Anxious for some permanency, I guess I needed to be reminded how temporal permanency is” and “Images have their way of dissolving and then abruptly returning, pulling along the joy and pain attached to them like tin cans rattling from the back of an old-fashioned wedding vehicle.”

One thought on “Review: M Train”