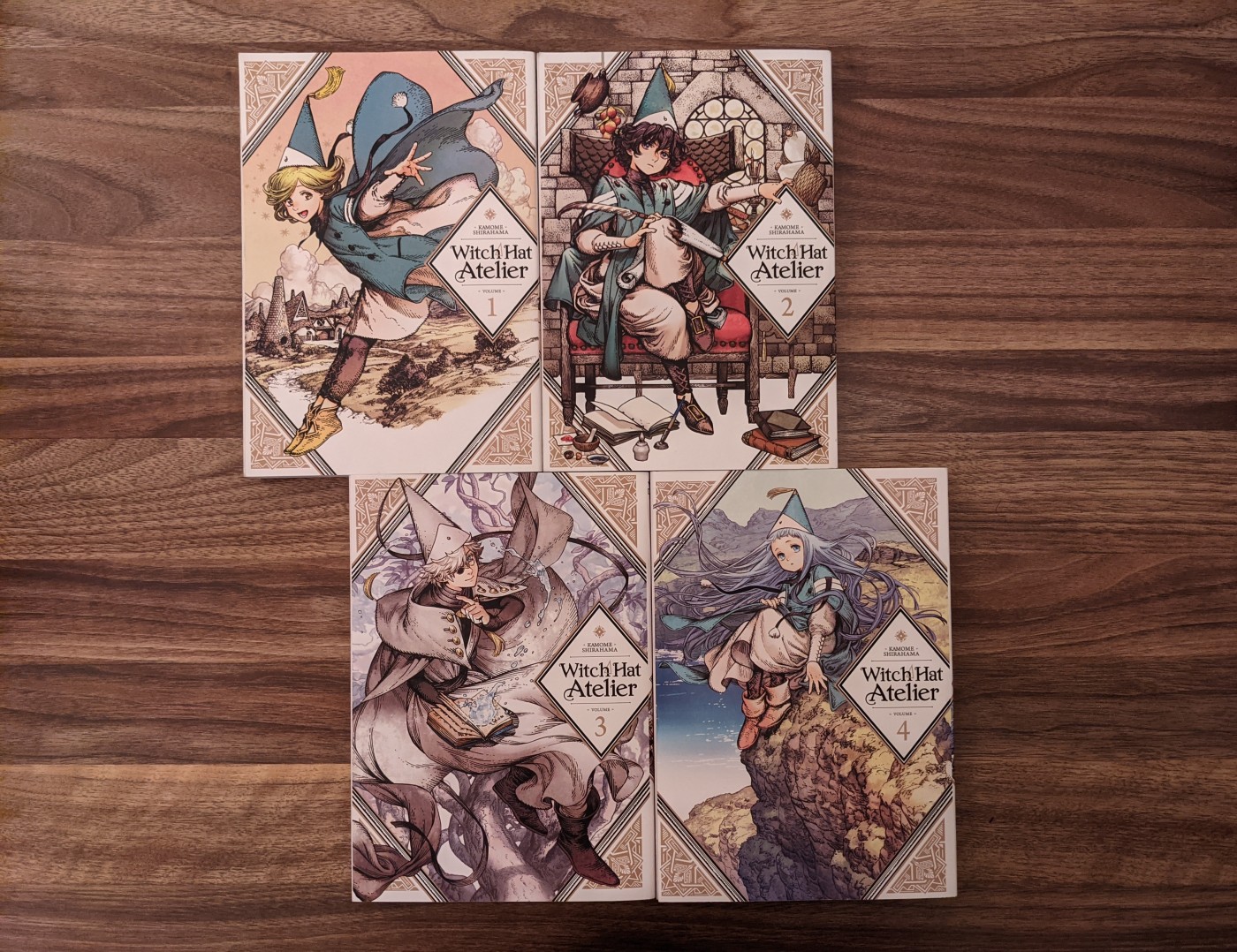 Witch Hat Atelier #1–4 by Kamome Shirahama
Published by Penguin Random House
Genre: Fantasy
Rating: Pete’s: 4 out of 5 stars; Indiana’s 5 out of 5 stars
Re-readability: I’m sure we’ll be revisiting these extremely devourable books again before too long.

In a world where everyone takes wonders like magic spells and dragons for granted, Coco is a girl with a simple dream: She wants to be a witch. But everybody knows magicians are born, not made, and Coco was not born with a gift for magic. Resigned to her un-magical life, Coco is about to give up on her dream to become a witch… until the day she meets Qifrey, a mysterious, traveling magician. After secretly seeing Qifrey perform magic in a way she’s never seen before, Coco soon learns what everybody “knows” might not be the truth, and discovers that her magical dream may not be as far away as it may seem…

Indiana: This was a complete impulse buy. I was just wandering around Barnes & Noble with too many books in my hand and the spine of the first one just caught my eye. I’m so glad it did. This has been one of my favorite manga series that I’ve ever read. The setting is richly imagined and incredibly intricate thanks to Shirahama’s drawing skills. At times, I have just stopped and marveled at certain pages and panels.

Pete: It’s absolutely stunning—and it’s made even more impressive by the fact that Shirahama both writes and illustrates them. Every volume has at least two or three full-page illustrations so rich with detail that I have to pore over them for a few minutes.

Indiana: And I would say that the storytelling is on par with the illustrations. The fact that the magic system is explained well, and early on in the story, sets it apart from so many other fantasy series. Usually, it seems you have to wait until halfway through the book or series to understand the system.

Pete: On top of that, it reverses one of my least favorite tropes: “Magic is only for special people.” I love that this world is filled to the brim with magic and fantastical creatures. A world with more magic is inherently more interesting to me than one with little magic. I also like the tricky moral dilemma of how the witches keep the secret of magic from the public. While the antagonists (a group known as the Brimmed Caps who use forbidden magic) seem to be essentially a terrorist cell, I don’t know how much I agree with the Knights Moralis.

Indiana: They seem to have gone too much to the other side of the Brimmed Caps in trying to keep the magic underwraps, though I have a feeling we’ll learn more about that in the coming books.
On another note, the cast of characters is awesome. It feels like each character is put under the spotlight just enough to create a fully developed cast.

Pete: Yes, I love that each character gets their moment. In some volumes, Coco doesn’t even feel like the main character, but I’m okay with that. She pulls off the ensemble cast very well. What’s been your favorite volume so far?
Indiana: That’s a tough one. I would say the fourth one just because it was the most suspenseful but I enjoyed all of them. Has anyone else read these? What do you think of the series?