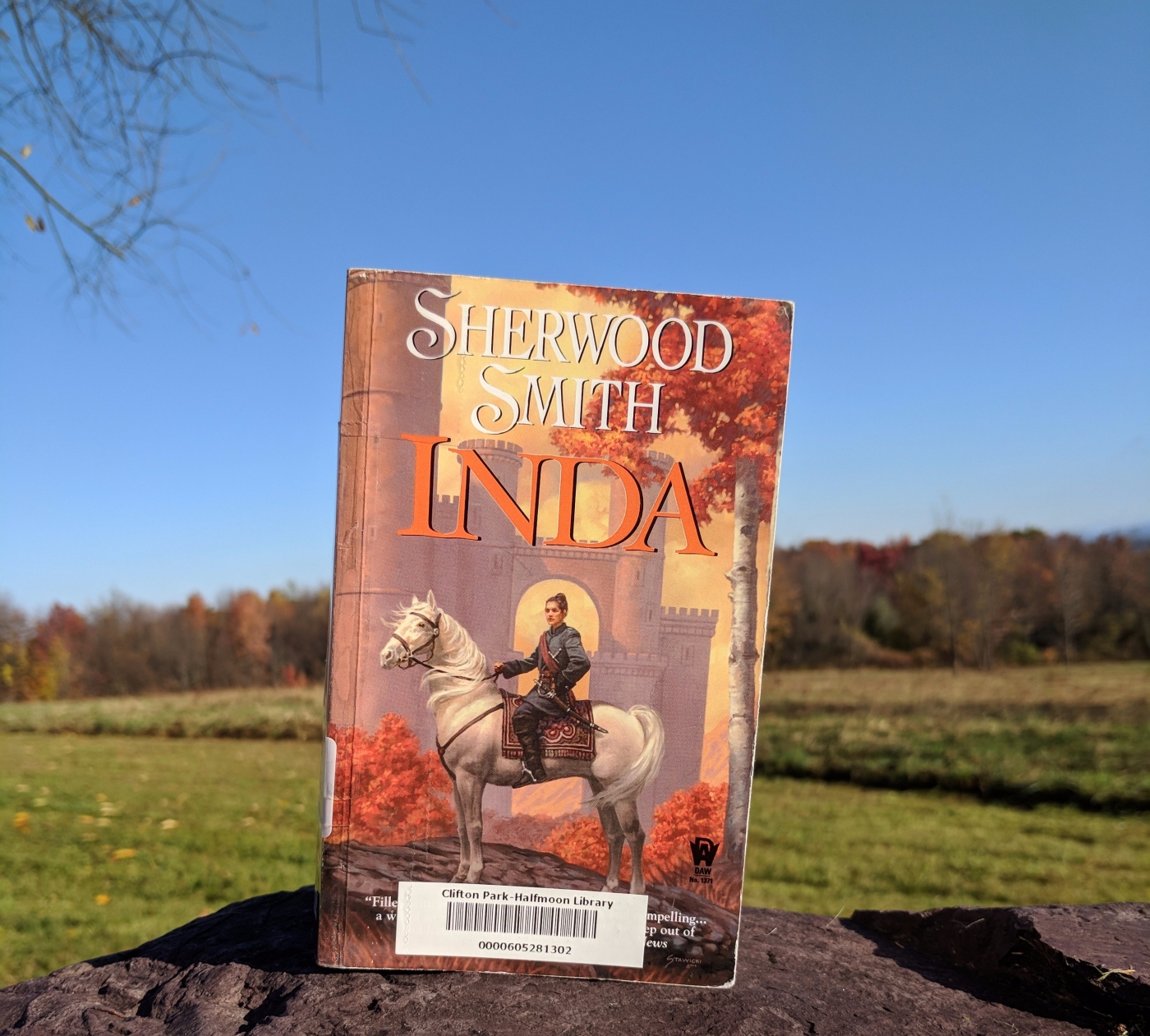 Inda by Sherwood Smith
608 pages
Publisher: DAW Books, 2006
Genre: Fantasy
Rating: 4.5 out of 5 stars
Re-readability: With the outstanding characters and deep lore, I’ll certainly reread this one, if its sequels are as good as the first!

Inda, by Sherwood Smith, is a military fantasy set in a historical world that feels both European and Caribbean. It follows Indevan (Inda) Algara-Vayir, brother to the future queen, and his experience in the royal military academy and beyond. If reading that sentence gave you a feeling of dread and visions of complex family trees and political alliances, your gut does not deceive you. This book is an interlocking mechanism made of alliances, royal families, politics, military maneuvers, and naval terminology.

People talk about the Inda quartet like it’s a fun little fantasy series that’s a blast to read. I didn’t realize that this book was as dense and thoroughly researched as it was before I started. While I enjoyed the book quite a lot, this isn’t a casual read. Just ten pages in, I found myself starting a list of characters on my phone. Twenty pages in, I realized that some of the characters on my list were the same people, just referenced differently. Two hundred pages in and I had a list of over 90 characters, and don’t even think of accusing me of hyperbole.

Despite the density of character introductions and history, the story is engaging from the start. Though Inda is not the most important figure, he is in the center of things. After reaching the royal academy at the young age of 10, Inda quickly becomes friends with Sponge (don’t worry, it’s a nickname), the brother to the future king. This book does one of my favorite things a book can do—it covers a long period of time, about six years, and in this chunk of time we watch a convincing development of the story’s many characters. Young boys and girls go from playing war games to leading real military maneuvers and meeting with ambassadors from abroad. The steady upward trajectory of this first book of four gave me a good sense for the types of roles the series’ many characters will take on.

These academy friendships and rivalries are the core of the story, but there is a larger story that surrounds the royal city. The Venn, an advanced and mysterious people from the north, have been preparing for war for a long time. The Marlovans (Inda’s people) are doing their best to prepare for this, but their navy is weak, and they have few political allies as a country. We see glimpses of the coming war in this book, and it’s clear that it will take the stage in the next few books in the series.

I enjoyed every moment of this subtle and precise military fantasy, particularly because of its intelligent and complex characters. Though Inda and his friends are young, their skill and intelligence is explained by the intensely political education they receive. I had some trouble adjusting to Sherwood Smith’s omniscient-third-person narrator, which frequently reveals the emotions of multiple characters in the same scene, but she handles emotions with such a gentle touch that it didn’t bother me.

Inda may not be a fast-paced adventure set in a vibrant world—it just isn’t that type of story. But in its detail and its density is a world that is vast, realistic, and filled to the brim with brilliant characters.