Manhattan Beach by Jennifer Egan — 2.5 out of 5 stars

Wyrd Sisters by Terry Pratchett — 3 out of 5 stars

Between the World and Me — Review to come

No shame this month! This was a great month of reading, in part because I sat myself down and tried to read 75 pages a day. It was a great decision!

I’m catching up to Indiana in John Green’s Turtles All the Way Down, which we’ll have a team review for sometime soon. We are also just starting Emily St. John Mandel’s Station Eleven, which we are apprehensive about—hopefully it will surprise us! I picked up Hotel World by Ali Smith, whose How To Be Both was bizarre and wonderful. And then… there is Oathbringer by Brandon Sanderson. I have never been as excited for a book release as I am for this one. At 1,100 pages, it’s a behemoth, and I am going to do my best to savor it. I cannot wait to jump back into the world of The Stormlight Archive! 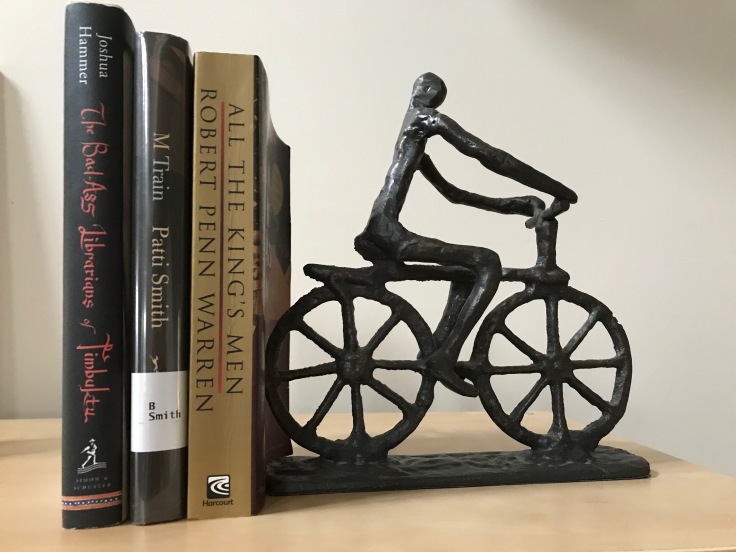 Warbreaker by Brandon Sanderson —  4.5 out of 5 stars

The Marriage Plot by Jeffrey Eugenides —  4.5 out of 5 stars

I’m still working through What is the What by Dave Eggers. It’s such a heavy book to get through, but I should be finishing it up in the next week or so.

This month will be a month of extreme variety. I finally got my hands on M Train by Patti Smith, which I’ve been looking forward to reading for awhile now. Then, because it’s November and election season, I’m going to try All the King’s Men by Robert Penn Warren. I’ve also started The Badass Librarians of Timbuktu by Joshua Hammer, which is proving to be as complex a narrative as it is an amazing story. Then, as discussed, Pete and I will be reading Oathbringer by Brandon Sanderson when it comes out on the 14th.