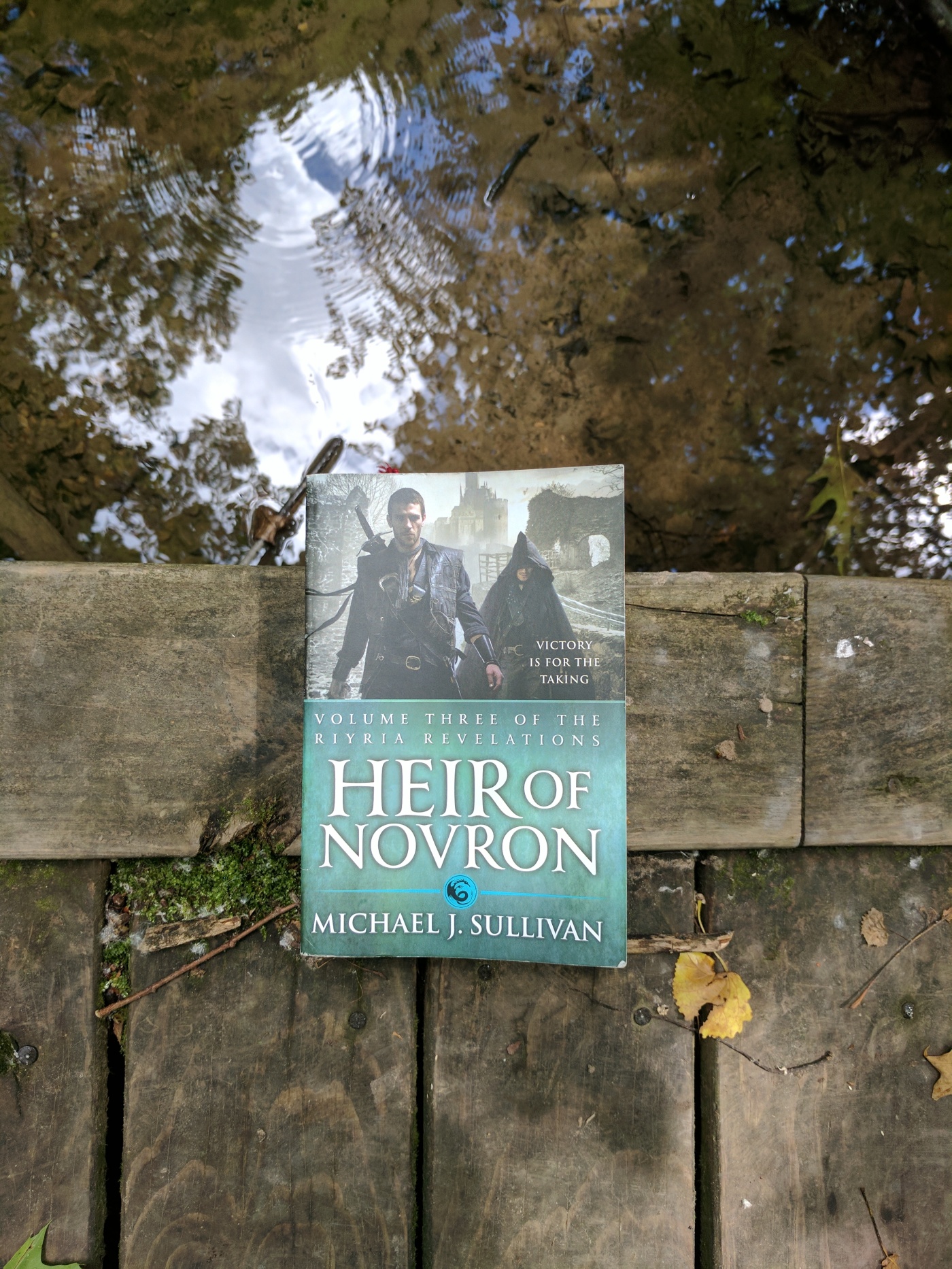 The reviews below contain minor plot spoilers for the previous four Riyria books. You should be able to read this post without feeling like anything major is spoiled, but it’s hard to talk about the plot of the fifth and sixth books in a series without giving away some plot hints about the previous books! I did write this with the mindset that new readers to Riyria Revelations would read it and hopefully pick up the series.

Wintertide by Michael J. Sullivan
323 pages
Orbit (Hachette Book Group) (2012)
Fantasy, fiction
Rating: 4.5 out of 5 stars
Re-readability: As characters and plotlines from earlier books reemerge, I know that Riyria Revelations is a series worth revisiting.

Opening the final book in a series you’ve loved dearly is never an easy thing to do. I was on the one hand so excited to read the conclusion to Riyria Revelations but on the other so reluctant to say goodbye to these wonderful characters (until I read the prequels, of course).

Wintertide is Riyria at its strongest. It features the usual cast of characters, placing more of its emphasis on Hadrian, Arista, Amilia, and Modina. This book was everything I’ve loved about the series so far: fast-paced, heavily character-driven, and adventurous.

In an attempt to rescue Princess Arista and Degan Gaunt, Hadrian is captured by Sentinel Luis Guy and forced to pose as a knight and kill Sir Breckton, a knight who stands in the way of the Church. In exchange, Hadrian will be rewarded with Arista and Gaunt alive and well.

This is all set just before the Wintertide festival and Empress Modina’s reluctant marriage to Ethelred.

Though the book focuses on Hadrian, we do get Royce’s story as well, but he plays a much smaller role than usual. As has been the trend in the past couple of books, a handful of new characters are introduced, this time in the form of a gang of young thieves. Unfortunately, they feel more like plot devices than deep, engaging characters—unlike Amilia’s role in Nyphron Rising.

This was my second-favorite Riyria book, just behind Nyphron Rising, which you can find in my previous review.

When I was coming to the end of the first Riyria Revelations book, The Crown Conspiracy, a whole cast of characters was coming together, and I thought to myself, “Oh, this is an ensemble story. They’re all going to go on lots of quests together!” We saw Hardrian and Royce the thieves, Esrahaddon the ancient wizard, Alric the soon-to-be king, and Myron the monk racing to stop a political overthrow of a kingdom. I couldn’t wait to see what adventures this group would go on in future books.

But Myron disappeared for two novels, Alric became a background character for a period, and Esrahaddon made minor appearances in the following three books.

Once I realized that Riyria was not an ensemble/quest story, I came to enjoy the new characters introduced with each book and the vastly different plots.

But Michael J. Sullivan wrote this entire series at once, with its grand finale in mind from the start.

The sixth and final Riyria Revelations book is the ensemble quest story I’d been hoping for from the beginning. It gathers the series most beloved characters (except for Modina, who we still see a lot of) in one place and sends them on the greatest quest of all—as the title implies, the quest to find the lost city of Percepliquis.

There’s no need to tell you much more than this. If you’ve read the first two Riyria volumes, the third is by far the strongest in terms of both characters and plot, and it wraps the series up very nicely. If you’ve never read a Riyria book, the final volume solidifies it as a well-crafted and satisfying series.

Percepliquis was arguably the strongest book in the series. Its focus on the characters and their personal struggles was beautiful, and its plot was also extremely tight. It has an ending that absolutely makes me want to restart from book one right away—some things are introduced toward the end that made me see the series with new eyes.

One of my favorite aspects of Riyria Revelations as a whole is its ability to have an overarching plot (that becomes even clearer with the last book) while featuring six books with different styles and conflicts. The Crown Conspiracy is an ensemble story with the backdrop of a political drama. Avempartha is a story of ancient beasts and prophecies. Nyphron Rising is a revolution tale, and The Emerald Storm is a nautical adventure to faraway lands. Wintertide is a both fiction of manners story and a political drama. And Percepliquis ties all of the series’ characters and themes together with an epic quest and a massive war.

Riyria Revelations is so much more than a fantasy series about two thieves set in a traditional fantasy setting. Though there is a fair share of violence and death, it’s never gratuitous, and the series is generally positive and uplifting. It could be enjoyed by a thirteen-year old as easily as an adult. It would make for a perfect introduction to fantasy, but I thoroughly enjoyed it as a moderately seasoned fantasy reader. The female characters are every bit as strong (or stronger) and dynamic as the male characters. There is so much more than meets the eye in Riyria Revelations.

Though no individual book in the series earned a perfect score from me, the series overall gets a perfect ten for its consistency and its outstanding conclusion.

“You’re here, supposedly, in a new land full of opportunity, but somehow have gotten trapped in a pretend version of the old country.”
This unconventional sci-fi love story was just what we needed this winter.
We’ve got some ambitious tbr lists lined up for March. Once again we’re focused more on fantasy, which just feels like the perfect genre to read right now.
“She sees how she, Agnes, must remain calm, steady, must make herself bigger in a way, to keep the house on an even keel, not to allow it to be taken over by this darkness, to square up to it, to shield Susanna from it, to seal off her own cracks, not to let it in.” ~ Maggie O’Farrell
“You’re shaking,” he said.
What I enjoyed most about this book was the incomprehensibly massive scale. We get to watch a planet of spiders evolve over millennia, from the stone age to space travel. We see a scientist go from the head of a terraforming uplift project to a veritable deity. Through the eyes of one classicist and linguist, we watch several generations of the last humans in the universe on a long-voyage ship. While these ideas aren’t entirely new to sci-fi, they made me feel an aching loneliness and terror as I put myself into the miserable lives of these desperate humans—and desperate spiders.
“The peculiarity of being a writer is that the entire enterprise involves the mortal humiliation of seeing one’s own words in print.” ~ Joan Didion
Top Ten Tuesday: Favorite Books with Good Love Stories