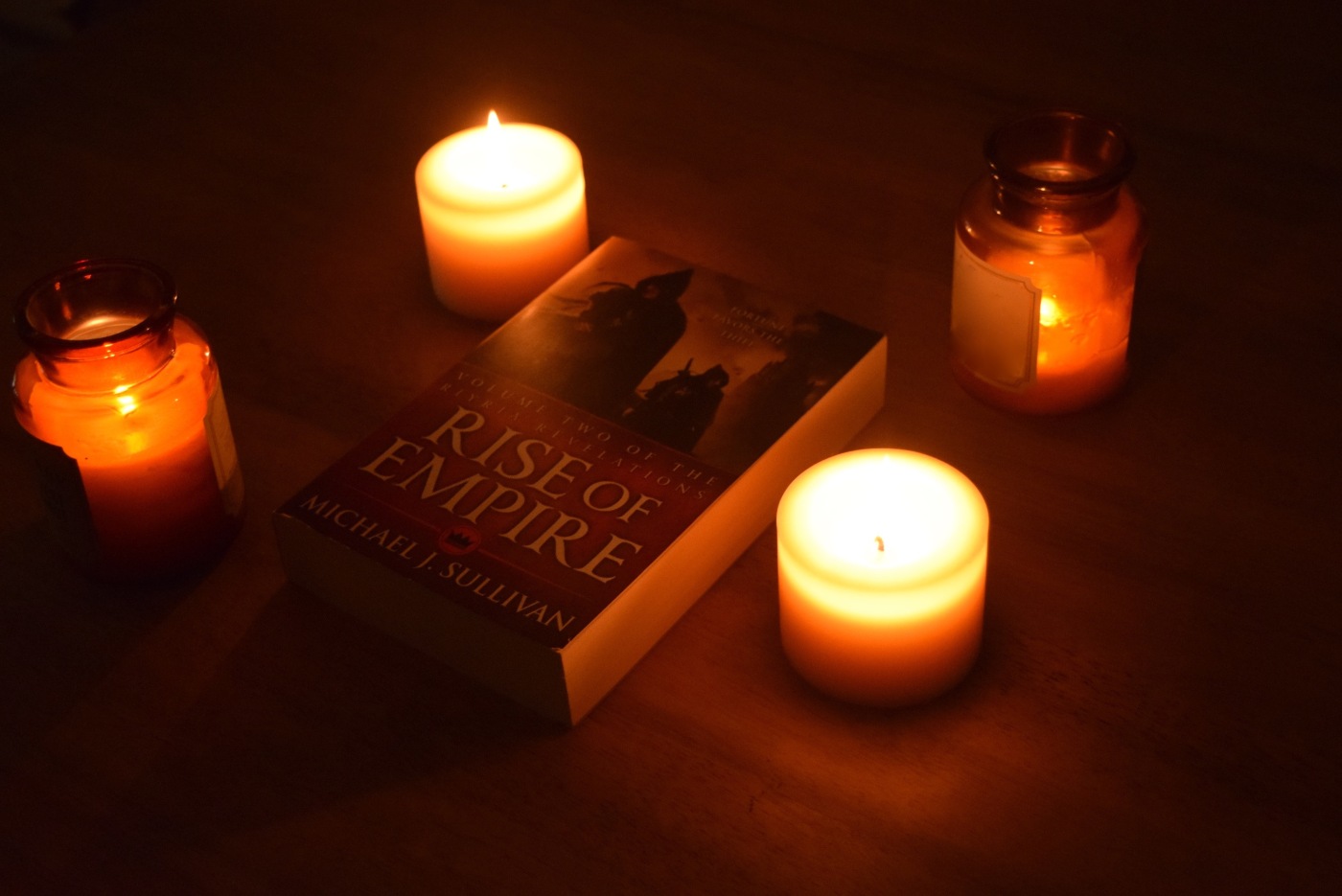 Note: Rise of Empire is two novels in one book, hence the double review.

Riyria Revelations follows two thieves, Hadrian Blackwater and Royce Melborn, who together make up the duo that is Riyria. While their trade a bit shady by nature, the two end up as heroes for many of their clients. Michael J. Sullivan wrote the entire six-book series before publishing the first, and his careful planning shows. While each book (from what I’ve read so far) is its own adventure, they are closely linked, and most characters have a tendency to return again and again.

The setting of Riyria, a world called Elan, is nothing out of the ordinary for fantasy. It features humans, elves, and goblins, as well as royalty, monks, and wars between kingdoms. There is a decent amount of magic, though most of the characters aren’t wizards or witches. While this classic Tolkien-esque backdrop might not be exciting, it allows Sullivan to focus on the characters and the plot, both of which are extremely strong. His writing is fast-paced and simple, but Sullivan has a talent for painting a scene with a few clever details.

This series is simply wonderful, and I dread coming to the end of its adventures. It’s a series that makes you feel cozy no matter where you are, and its characters are clever and entertaining. While Riyria Revelations may not break much new ground, it is exciting, intricate, and, at times, heart-warming.

Rereadability: With the large cast of characters and bits of foreshadowing, I can definitely see wanting to reexperience the adventures in Riyria Revelations.

Picking up a year after the events in Avempartha, Book Three of Riyria Revelations gathers many familiar faces from the first volume and casts them into new adventures in new places.

Nyphron Rising has a bit of a wider scope in the world of Elan than the first two books. There are two groups of characters that we get to follow: a servant named Amilia and Empress Modina (formerly Thrace Wood from Dahlgren); and Royce, Hadrian, and Princess Arista. Both groups are trying to navigate the two sides of a rapidly changing world under a new Empire.

The plot in Nyphron Rising develops and shifts so rapidly that it’s hard to talk about very much without spoiling the book’s twists, so I’ll keep it brief.

Amilia is a woman who worked in the kitchen of the imperial palace but is abruptly recruited to be Empress Modina’s personal secretary. This sudden shift into a position of extreme importance comes with high demands and a good deal of danger.

Empress Modina is very different from the Thrace that we saw in Avempartha. Traumatized and mostly mute, she has become a frail puppet for the Church to manipulate. It is up to Amilia to train her and bring her back to health.

Meanwhile, Hadrian and Royce are hired by Princess Arista to find allies for the Kingdom of Melengar, which is alone in a world quickly being taken over by the empire. Hadrian still does not know that he is the Guardian of the heir of Novron, and Arista struggles to find out what sort of leadership, if any, she holds in this new world.

This was my favorite book yet in Riyria Revelations for its quick pace and character development. It also gave me a better sense of where the series is headed, and I’m eager to see what the consequences of this book (and its sequel) mean for its characters.

It’s hard to find anything wrong with this Nyphron Rising. If anything, its climax felt slightly cramped, but the book had my attention from the start and didn’t have a dull moment.

If you’ve read the first volume of Riyria (books one and two) and are hesitant to continue, I highly recommend doing so. Nyphron Rising brings the series’ main conflicts together and draws the trajectory of the series to come.

Rereadability: This wasn’t my favorite Riyria book, but I found its unique setting fun and intriguing—for that reason, I can definitely see reread value in this one.

Assuming no one who’s reading this has read Nyphron Rising since it is in the same volume, I’m going to forgo a plot summary in the interest of avoiding spoilers.

The setting and pacing of this book are much different from the previous three. The plot is a bit front-loaded—a lot happens in the first half of the book, but the second half does not wrap things up all of the book’s conflicts.

The Emerald Storm felt like a bridge in the middle of the series, connecting dots and introducing new questions that will (hopefully) be answered in the third and final volume. I trust in Sullivan to resolve the series’ many conflicts in a satisfying way, but this installment did fall a bit flat for me.

I think the main reason for this is its shift in focus away from characters and toward the bigger plots. Nyphron Rising was proof that Sullivan can keep the characters’ personal struggles at the forefront while addressing conflicts larger than they are. Though Hadrian, Royce, Arista, Amilia, and Modina are still the main characters here, they get a bit lost in the schemes—we don’t get to learn as much about them as we have before. Instead, they feel like pieces in the workings of the plot.

A lot happens in The Emerald Storm, and it is just as fast-paced as the first three books, but there were more loose ends left over than I expected, and the large cast of new characters is at times overwhelming.

Though the climax felt rushed and many questions went unanswered, I still enjoyed The Emerald Storm and am looking forward to the end of Royce, Hadrian, and Arista’s adventures in the final volume.

One thought on “Riyria Revelations: Rise of Empire (double review)”