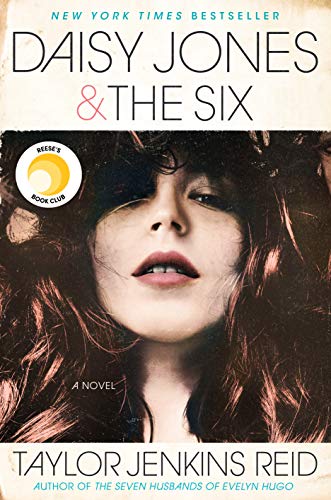 “I think you have to have faith in people before they earn it. Otherwise it’s not faith, right?”

Daisy Jones & The Six by Taylor Jenkins Reid
368 pages
Genre: Fiction
Published by Random House, 2019
Rating: 4.5 out of 5 stars
Re-readability: I might come back to this one someday.
Reviewed by Indiana

This book seemed like it was everywhere when it came out in March. Maybe it was because it was part of Reese’s Book Club, but I saw it at every end cap of every bookstore for several months.

And it took until just a week or so ago for it to be available at my library. I was a little wary of this one because of all the attention it got, but that ended up being a ridiculous notion.

Told through interviews, Daisy Jones & The Six tells the story of a (fictional) legendary rock band that was at the top of its game when everything fell apart. The novel delves deep into the formation of the band and follows its trajectory into stardom and its fall.

Daisy Jones is an intriguing character, with a strong sense of self but a missing piece that she fills with drugs and, at times, sex. She becomes a singer and songwriter by hanging out with musicians and figuring out that she could write songs better than they could.

Her story collides with The Six about halfway through the book, though we learn a lot about the complicated and dramatic dynamics of the band well beforehand. Brothers Graham and Billy founded the band, though Billy is the self-appointed band leader. He struggles with substance abuse, which becomes a theme throughout his life, even when he has a family and is getting better for them.

Daisy further upends the band’s dynamics, forcing her way into writing songs with Billy and basically rousing the other band members to rebel against his wishes as well. She and Billy become close, writing some of their best songs and recording their best album, but it gets complicated when their relationship evolves beyond the music.

Daisy Jones & The Six surprised me. I didn’t realize how much I enjoyed it until after I was done reading it and I just kept going back to it in my mind. I flew through the novel in just a day or two because of the interview-style writing. It felt more like watching a documentary, where interviews and songs and newspaper clippings were all pieced together.

Taylor Jenkins Reid is a clever writer and has a few really exceptional and wise lines, though she also writes realistic characters that don’t feel like they’re just vessels for her clever phrases.