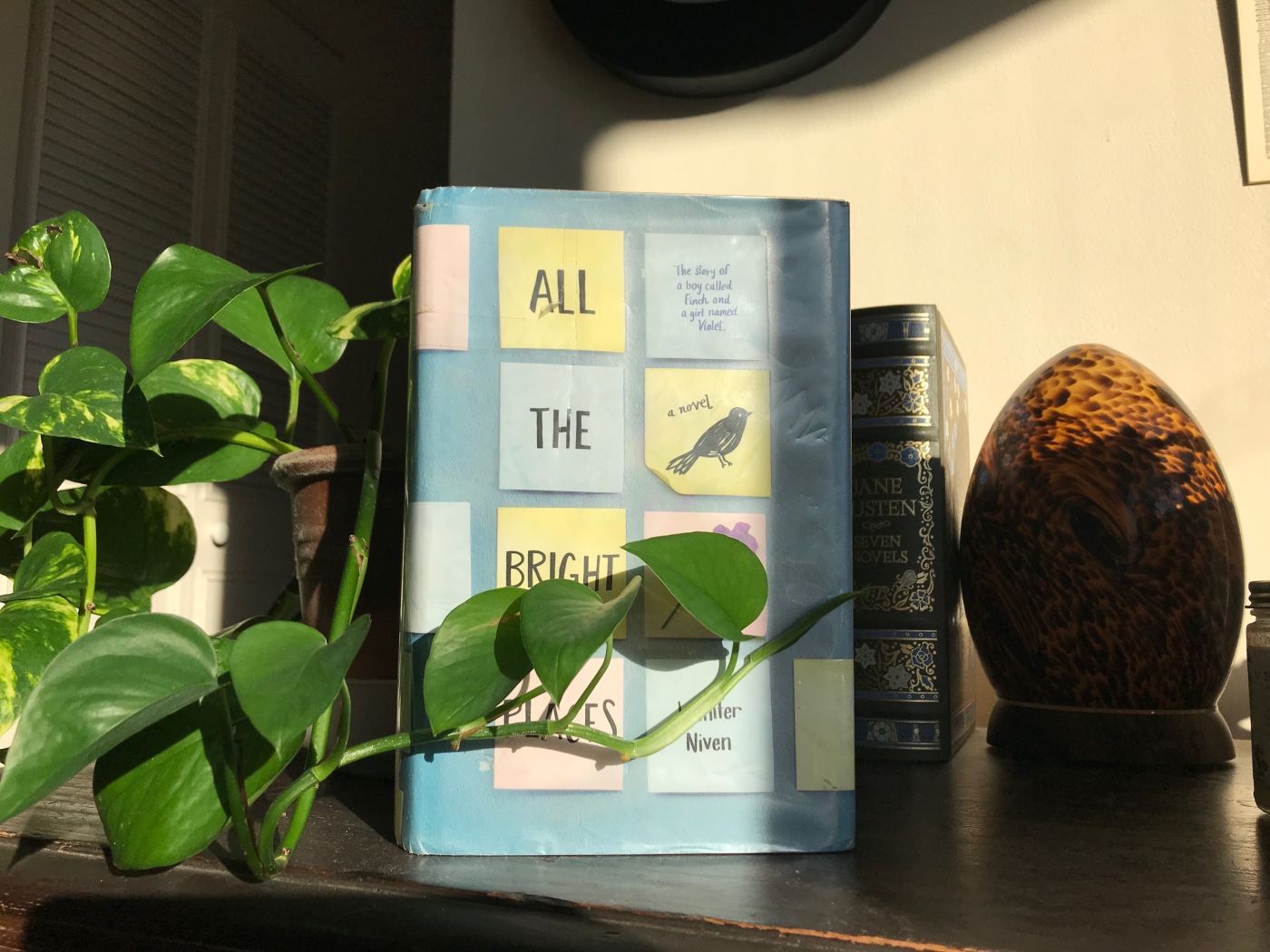 “The thing I realize is, that it’s not what you take, it’s what you leave,” Jennifer Niven

All the Bright Places by Jennifer Niven
378 pages
Genre: Young Adult, Fiction
Published by Knopf, 2015
Rating: 4 out of 5 stars
Re-readability: I don’t think I’ll necessarily come back to this one, but I would like to read others by this author.
Reviewed by Indiana
Spoiler-free review

We meet Violet and Theodore Finch Jr. on the ledge of a bell tower.

Finch has recently “woke up” from one of his deep sleeping spells, where he’s not really sleeping, but his consciousness doesn’t seem to be available to him. He’s wondering if today is a good day to die and whether or not throwing himself from his high school’s bell tower is a good way to go.

Meanwhile, Violet has been in her own version of “asleep” over the last few months since her sister died in a car accident. They were driving, it was icy and Violet told her sister to take the bridge. Violet survived the crash, her sister didn’t. She’s also wondering if today might be a good day to die.

Finch is the one to talk Violet off the bell tower ledge, but through a series of adventures, many spent exploring the Indiana countryside, Violet is able to help Finch stay “awake.” At least for a little while.

This was a well plotted story, with just the right amount of unexpected. I had a few problems with some of the descriptions; the author explained her descriptions a bit too much at times. But overall, I found it to be heart wrenching and worth the read.

The one complaint that I kept hearing from other readers when this book first came out was that the characters were their diseases. I went into the book thinking that that might be the case. While that may have been true at times for Finch, I found it difficult to see that with Violet.

With Finch, it’s clear from the start that he comes from a family that’s seen domestic violence and struggles with mental and emotional issues. From dialogue with other students at high school, Finch’s character is known as the “crazy” kid. But he’s also seen as a rock star figure, and a bad boy among his classmates. During one party scene, one girl tells Violet that he knows what to do with a girl.

However, it’s strange because it’s not a side that readers really get from Finch himself. The reader mostly sees and understands Finch through his own voice and perspective and he spends most of the time thinking about how he’s trying so hard to stay “awake,” or having manic thoughts. He also thinks about Violet a lot and tries to use her as a reason to not go under and to stay on this earth. So in that sense I can understand why many readers felt that Finch was simply a characterization of a mental illness.

However, when it comes to Violet, I’m not sure what the argument is. She spends much of the book in one stage of grief or another and has to deal with that more as the book goes on. But I wouldn’t say that it felt like she was only a characterization of process. If anything, she showed a strength that I didn’t expect.

Overall, this book surprised me in how easy it became to get invested in these characters and in how much I was rooting for them. Niven discussed mental illness and death, two incredibly challenging topics to talk about let alone write about, in a way that felt genuine. She also had some personal background and experience with both of those topics and, as she later writes, it’s part of the reason why she felt she had to write this story.