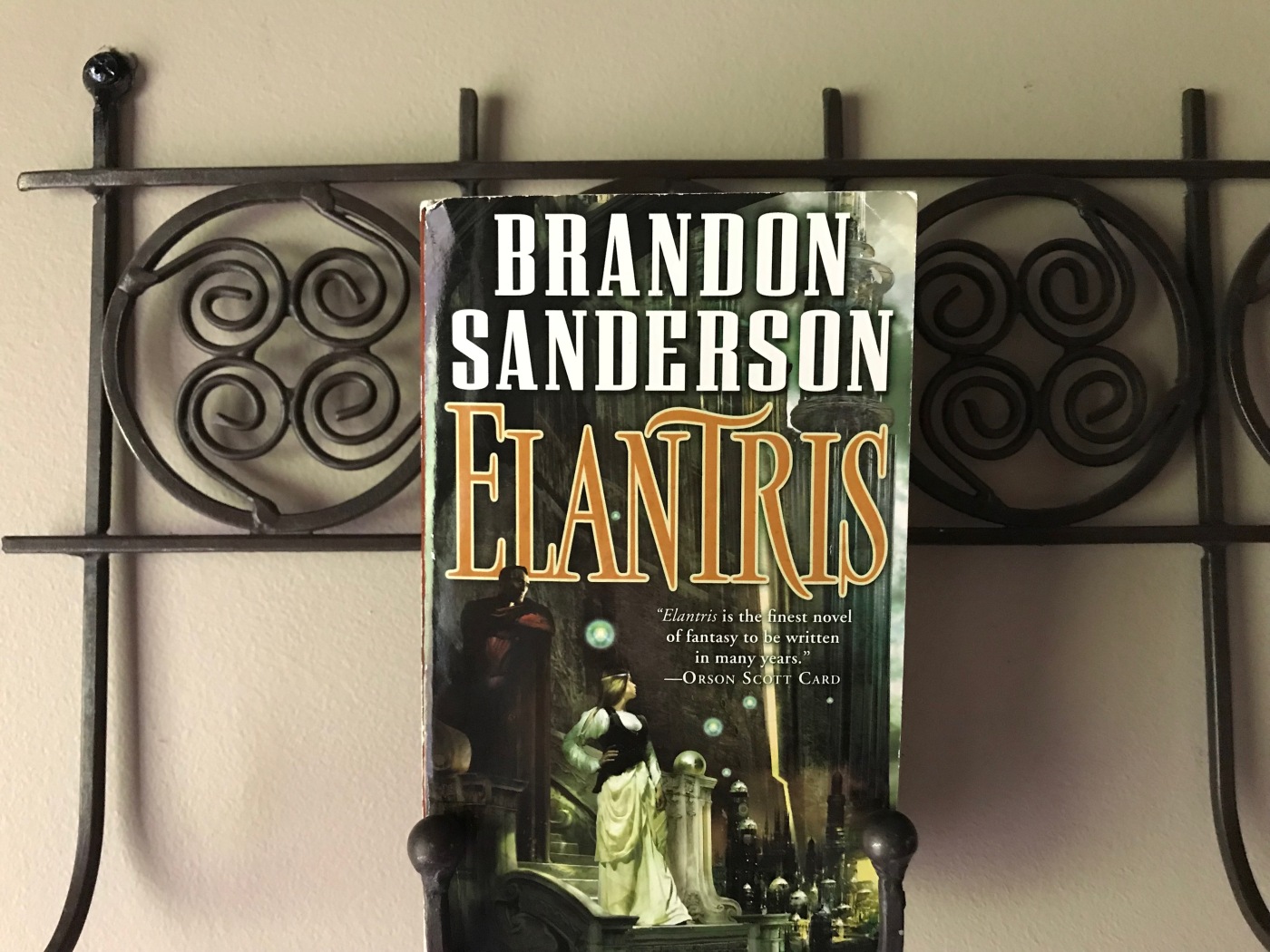 “That’s exactly the problem. Everyone’s convinced that their lives are over just because their hearts stopped beating.” ~Brandon Sanderson, Elantris

Elantris by Brandon Sanderson
615 pages
Published by Tor,  2005
Genre: Fantasy
Re-readability: This one is definitely worth revisiting, especially with its connections to the rest of the Cosmere
Rating: Pete’s: 4.5 out of 5 stars Indiana’s:

The cursed city of Elantris once belonged to the gods. Elantrians wielded incredible powers—but ten years ago, their powers vanished and became a curse so horrific that the rest of the world banished the Elantrians to their once gleaming city. Raoden is a prince who has been recently taken by the curse of Elantris. Sarene is a princess whose soon-t0-be husband has died—or banished. And Hrathen is a priest from a powerful empire who must convert the people of Kae to save them from his empire’s armies. This standalone fantasy epic is Brandon Sanderson’s first published novel.

Pete: This was one of those books that I had heard a ton about before reading—both good and bad. The most common opinion seems to be that it’s Sanderson’s weakest work, the pacing is terrible, and the characters are flat. I disagree on all three of those opinions.

Indiana: Agreed. I set myself up to be utterly disappointed by this one. I figured that it wouldn’t come close to Sanderson’s Warbreaker or any in the Stormlight series. But I found that the characters were wonderful and complex and I didn’t question their decisions for a second.

Pete: Hrathen, Sarene, and Raoden were all rational characters—and all characters I could sympathize with. Hrathen might be Sanderson’s strongest character, even if he isn’t my favorite. And like all Sanderson books, the worldbuilding was convincing and unlike anything I’ve read before. I’m always impressed with how different the feel of his various series are.

Indiana: This one also did a wonderful job of balancing the world building. The magic elements were well explained (even if it did take awhile for Sanderson to get there), as were the religions in the world. This one was also surprisingly political, as a rich nation shut out its “diseased” population and left them with nothing but a basket full of food.

Pete: Sarene’s attempts to fix the broken economy and society of Kae were also interestingly political—which I liked. It bothers me when an author creates a problem in a society and then solves it in a way that avoids politics or philosophy. I am all for authors letting their politics show in their stories. I don’t think Sanderson’s views would bother anyone in this case, but he did get into some issues (like charity, equality between genders, religion and government). Overall, my favorite part of the story was either Raoden’s struggle to unite Elantris—or maybe the explosive finale (one of Sanderson’s best, in my opinion).

Indiana: That’s a tough tie. I loved Raoden’s entire arch, not that he changed a ton. He started out as this person that everyone loved and he ended up as a person everyone loves. But in the middle he started to inspire people to work, fight through their pain, and try to find joy even in Hell. In other words, what most people would want to see in a king. Not an easy feat considering what the city of Elantris was like . . .

Pete: The horror of Elantris’s curse (which is revealed at the start of the novel) is something I thought about for a long time after finishing the book; the cursed become covered in gray splotches, and any pain or injury they experience becomes permanent. Raoden’s stubbed toe at the beginning of the story is a constant pain that never diminishes. Eventually, the pain becomes too much for anyone to bear, and they lose their minds. Sanderson is known for his magic systems, and the fact that this book’s primary form of magic came in the form of something distinctly un-magical was a surprise.

Indiana: Yes, but it felt right for the book. And the simple horror of forever having that feeling of a stupid stubbed toe honestly stuck in my head for a while after reading that chapter. I’d like to know what inspired that part of the book. Perhaps a bruised funny bone or stubbed toe? Either way, it was perfect. One last thing I want to bring up: I’m usually a tough critic when it comes to pacing. But there was really only one section where it slowed down a bit too much for my taste. Sanderson got a bit bogged down with a subplot that I didn’t feel like served the overall plot too well. Otherwise, it really held a steady pace the entire time and was exciting right until the end.

Pete: The only thing that nagged at me with this one was the way a certain major problem is solved in the finale—but it’s too small a detail to detract from my enjoyment of this unique story filled with characters I won’t forget anytime soon.

This unconventional sci-fi love story was just what we needed this winter.
We’ve got some ambitious tbr lists lined up for March. Once again we’re focused more on fantasy, which just feels like the perfect genre to read right now.
“She sees how she, Agnes, must remain calm, steady, must make herself bigger in a way, to keep the house on an even keel, not to allow it to be taken over by this darkness, to square up to it, to shield Susanna from it, to seal off her own cracks, not to let it in.” ~ Maggie O’Farrell
“You’re shaking,” he said.
What I enjoyed most about this book was the incomprehensibly massive scale. We get to watch a planet of spiders evolve over millennia, from the stone age to space travel. We see a scientist go from the head of a terraforming uplift project to a veritable deity. Through the eyes of one classicist and linguist, we watch several generations of the last humans in the universe on a long-voyage ship. While these ideas aren’t entirely new to sci-fi, they made me feel an aching loneliness and terror as I put myself into the miserable lives of these desperate humans—and desperate spiders.
“The peculiarity of being a writer is that the entire enterprise involves the mortal humiliation of seeing one’s own words in print.” ~ Joan Didion
Top Ten Tuesday: Favorite Books with Good Love Stories
“I leap out of the water. But when I come down, the shark is right in front of me. I jump again, looking for an escape." ~Rosanne Parry