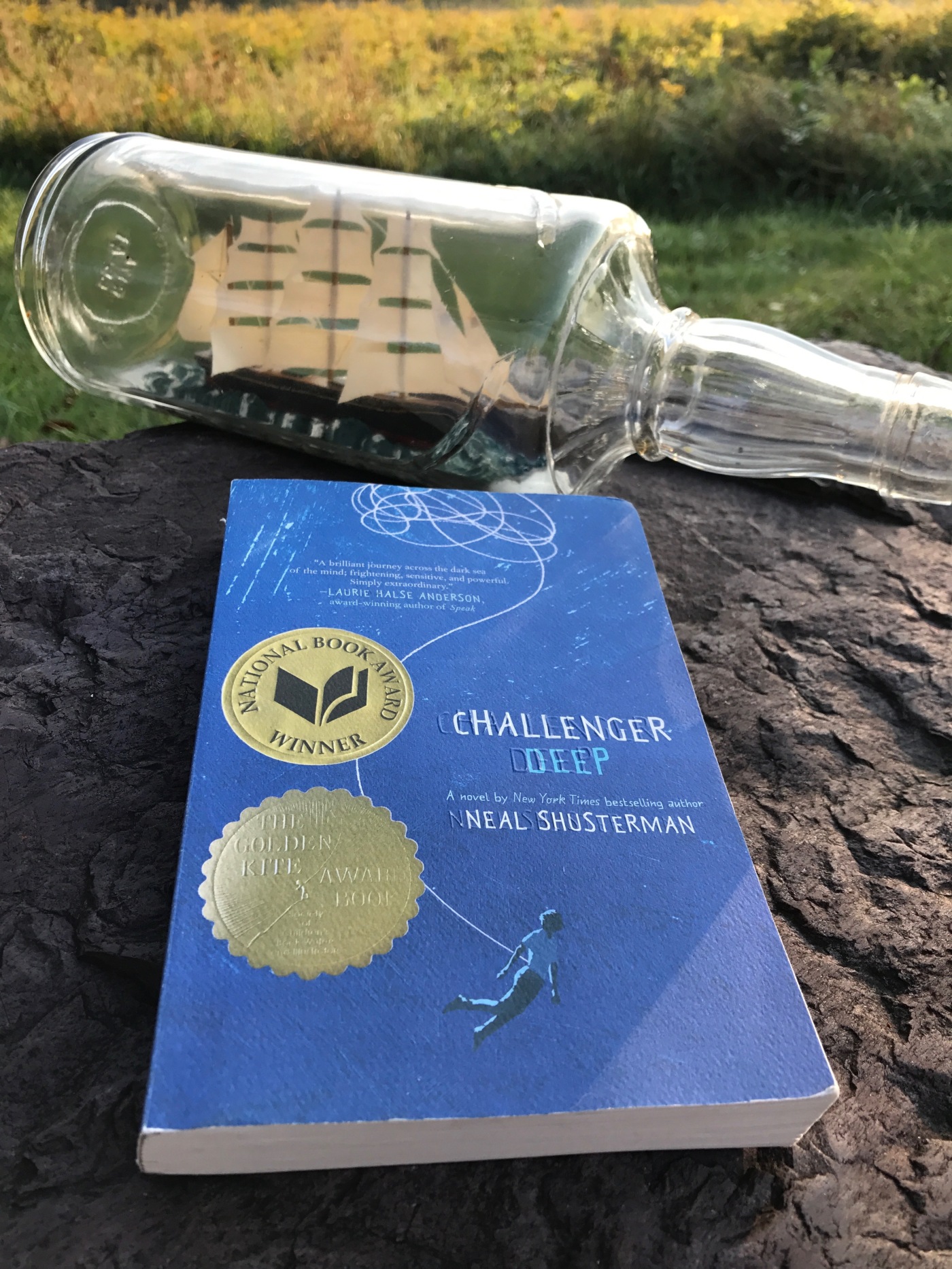 Challenger Deep by Neal Shusterman
308 pages
Harper Teen, 2015
Genre: Young adult
Rating: 4 out of 5 stars
Re-readability: I could pick this one up again.

As its title indicates, Challenger Deep is about a lowest point. But it’s not referencing the lowest point found on the earth’s seabed.

Caden Bosch, the artistic 15-year-old protagonist, gets pulled into the “Challenger Deep” of mental illness. When the book begins, Caden’s mind weaves in between seeing reality and slipping into paranoid fantasies that manifested themselves on a mysterious ship headed for the Marianas Trench.

He tries to hide these moments of panic from his parents, even when he suddenly feels the need to walk for hours at a time or when he knows that someone at school is trying to kill him. Meanwhile, he is becoming a part of life on the ship. He befriends a few people and gets stuck in a war of mutiny between a terrifying captain and his omnipotent parrot.

Caden can’t keep the paranoia or his other symptoms from his parents very long before they send him to a psych ward. He befriends others in the institution; some who are more ill than he and some who are healthier. Caden eventually learns that he’s suffering from schizophrenia and that he’ll have to continue taking medication for the rest of his life.

The medication makes him feel like he’s swimming through Jell-O, like he’s not himself. Eventually—after a tragic event at the ward—he stops taking his “medication cocktail” with devastating results. Caden must decide whether he wants to sink into the depths of Challenger Deep or rise up to the surface.

Challenger Deep is one of the most unique young adult books I’ve ever read. It’s told in a fluid way, with reality and fantasy flip-flopping from chapter to chapter, interspersed with Caden’s drawings. Shusterman does a fantastic job of capturing what it’s like to be on what Caden calls a medication “cocktail” and what it’s like to be a parent in that situation—as evidenced by The Golden Kite Award and The National Book Award that the novel received.

Of course, the punchline of the whole novel is that Caden’s experiences were, in a way, real. As various press and book conferences, Shusterman spoke about his son’s experiences living with Schizophrenia, as well as his best friend who committed suicide because of it. Challenger Deep takes on the immensely difficult task of depicting schizophrenia in a realistic light and it’s a story that Shusterman is well-equipped to tell.

That being said, the book is not a light and easy read. At first, I was confused by the ship’s symbolism: there were so many characters that seemed loosely based on certain members of his family that I tried to pair up with people on the ship. But the ship scenes started to make sense to me after Caden entered the ward. It became easier to see where Caden’s characters and concerns were coming from.

Throughout the novel, Caden shares a few metaphors about living with a mental illness that I think anyone would agree are on-point: “There are many ways in which the “check brain” light illuminates, but here’s the screwed-up part: the driver can’t see it.”

Despite its heaviness, Challenger Deep was an inspiring read and it gave me a better understanding of an illness I knew very little about.