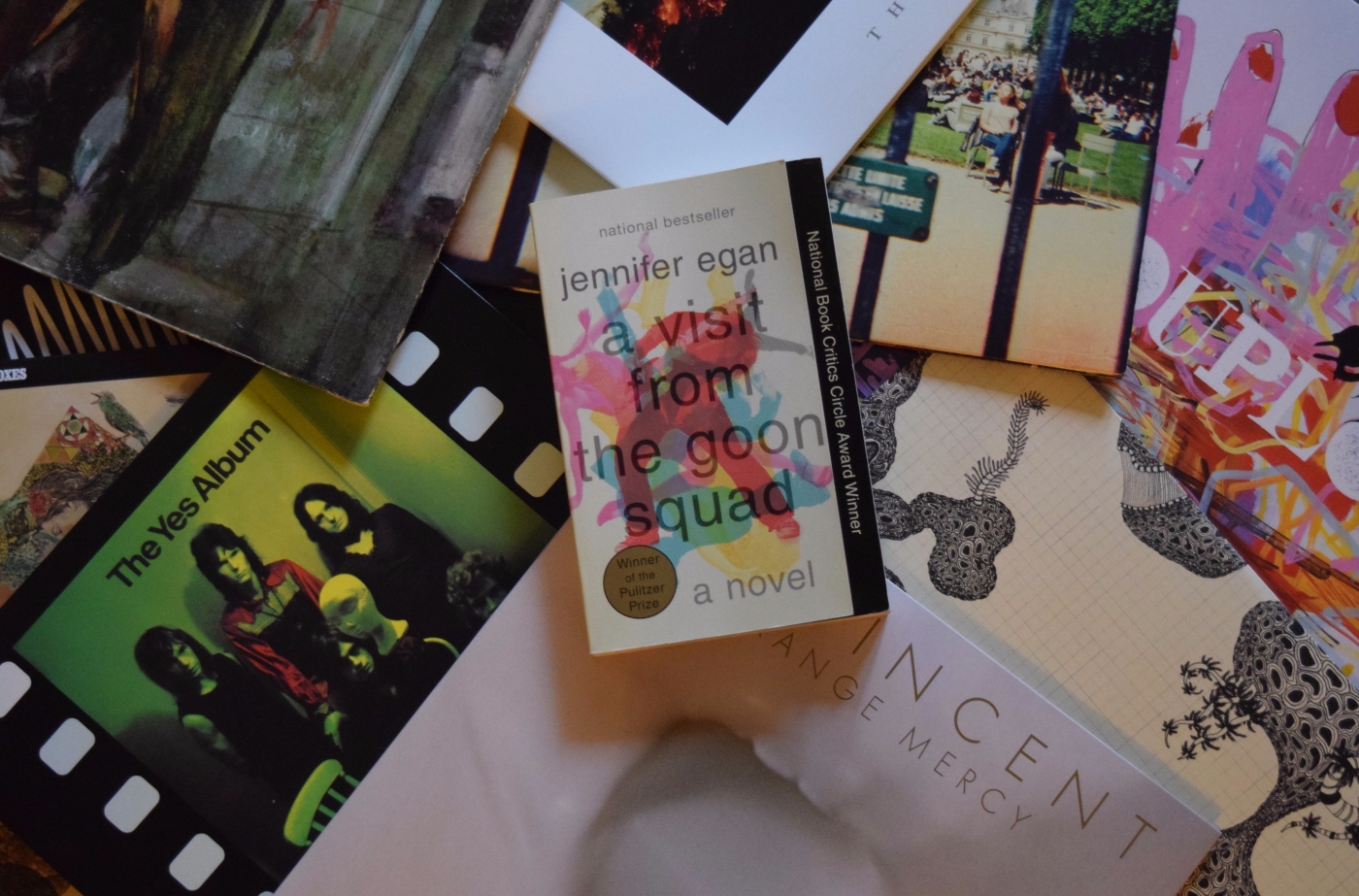 A Visit from the Goon Squad by Jennifer Egan
340 pages
Anchor books (Random House) (2010)
Genre: Fiction, science fiction
Rating: 5 out of 5 stars
Re-readability: I will probably reread this within the year, and again and again after that.

It isn’t often that I close a book and feel goosebumps crawl across my arms while a deep satisfaction glows in my core. But that’s exactly what happened at the end of A Visit from the Goon Squad.

Don’t think that this is just another “watch these wonderful characters’ lives intersect in magical ways” book. The only way Egan could have written something so complex and interlocking is with a giant wall of push pins, string, and timeline diagrams. It’s set in the present day—and the eighties, seventies, nineties, and twenty-twenties. Maybe even beyond.

Because of its episodic format, it’s very fast-paced, and the end of each chapter feels like a perfect, satisfying stopping point. If you’ve paid close attention, you will be rewarded by the many returning characters and how their pasts or futures affect the current story. But each chapter stands so well on your own that if you’ve lost track of who’s who, you will still enjoy the chapter as a standalone story.

There are too many themes going on to boil the book down to what it’s really “about.” Regret is a major theme, and trust, and generational gaps—any reader will probably connect strongly with something in this book.

My only real complaint with A Visit from the Goon Squad is that it features a character type that feels like it has been dissected endlessly in recent TV shows, movies, and books: a man who has lied, or lusted his whole life and has much to atone for. Several of the men in this story fit that description, and while many of the women have also made mistakes that they regret, they are more often victims than the men, or their mistakes didn’t come from ill intentions. I don’t think this is Egan’s attempt to make any generalizations about the sexes, but the men (of which there are more than women) in the stories feel like different hues of the same “I’ve brought this upon myself” character.

But the book excels in so many places that this didn’t bother me much. The writing is simple while being fresh, and her style changes to fit each chapter’s protagonist. It’s impressive at times that this book was written by one individual.

The result is a book that is ambitious while being easy to read and wonderfully immersive.

This book is ambitious while being completely easy to read. Though I haven’t been reviewing books for very long, I won’t hesitate to say that this is one of my favorite books of all time.

7 thoughts on “A Visit from the Goon Squad”

“You’re here, supposedly, in a new land full of opportunity, but somehow have gotten trapped in a pretend version of the old country.”
This unconventional sci-fi love story was just what we needed this winter.
We’ve got some ambitious tbr lists lined up for March. Once again we’re focused more on fantasy, which just feels like the perfect genre to read right now.
“She sees how she, Agnes, must remain calm, steady, must make herself bigger in a way, to keep the house on an even keel, not to allow it to be taken over by this darkness, to square up to it, to shield Susanna from it, to seal off her own cracks, not to let it in.” ~ Maggie O’Farrell
“You’re shaking,” he said.
What I enjoyed most about this book was the incomprehensibly massive scale. We get to watch a planet of spiders evolve over millennia, from the stone age to space travel. We see a scientist go from the head of a terraforming uplift project to a veritable deity. Through the eyes of one classicist and linguist, we watch several generations of the last humans in the universe on a long-voyage ship. While these ideas aren’t entirely new to sci-fi, they made me feel an aching loneliness and terror as I put myself into the miserable lives of these desperate humans—and desperate spiders.
“The peculiarity of being a writer is that the entire enterprise involves the mortal humiliation of seeing one’s own words in print.” ~ Joan Didion
Top Ten Tuesday: Favorite Books with Good Love Stories