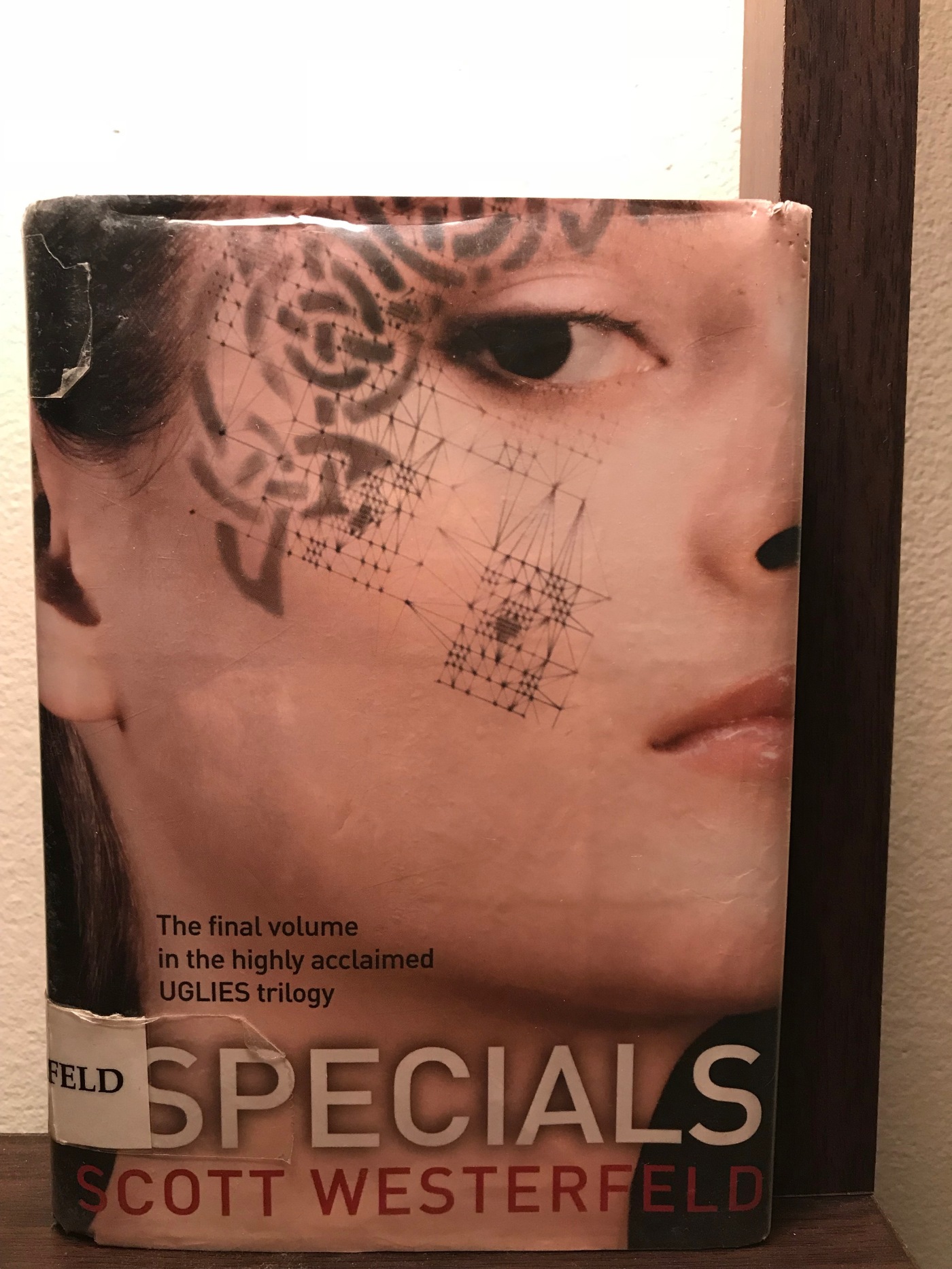 “I’m not sure what I am anymore… Sometimes I think I’m nothing but what other people have done to me―a big collection of brainwashing, surgeries, and cures… That, and all the mistakes I’ve made. All the people I’ve disappointed,” Scott Westerfeld

Specials by Scott Westerfeld
372 pages
Genre: Young Adult, Fantasy, Sci-fi
Published by: Simon Pulse, 2006
Rating: 4 out of 5 stars
Re-readability: I might come back to this one someday.
Reviewed by Indiana
Spoiler-free review

The conclusion of Specials was a return to the start of Uglies in some ways.

But let me back up. For those who aren’t familiar with Westerfeld’s series, it’s a sort of post-apocalyptic world where what matters is making everyone as evolutionarily-correct (or healthy) as possible through surgery. Not just plastic surgery but a restructuring of bones and skin. The idea that perfection on a scientific and aesthetic level are just a “surg” or two away.

Tally, the protagonist, has lived in that world most of her life. But she’s also spent time in what’s called the Wild; aka the woods, and with those who have runaway and decided to live there. At this point in the series, she’s been taken by the city’s most terrifying authority, Dr. Cable of Special Circumstances and she’s been made into a Special, with fangs, coal black eyes, nails as hard as steel, and incredible healing capabilities, as well as a few ego issues.

After a few “tricks” or tasks sent from Dr. Cable go wrong, she finds herself in the middle of a war between two cities, one that she accidentally had a hand in starting. As usual, things don’t go as Tally planned and she is forced to work against the way that her mind has been rewired in order to save, well, everything.

Reading Specials for a second time, and as an adult this time, there were definitely a few plot points that I questioned. It seemed odd to me that in previous books, there hadn’t really been talk of other cities being in the world. It felt to me like the society that Tally grew up in was the only one left after the “Rusties” killed the environment. Yet, over halfway through this book, we suddenly arrive in a completely different city with similar issues but very different policies (they still have surgeries but they let people decide however they’d like to look, as long as it’s not dangerous). It fits the storyline, but I would have liked to have gotten a little bit more than a hint in previous books that there were other cities.

I was very glad that this book wasn’t centered around Tally’s romantic interests and that those took side stage for much of the book, though they did play a crucial role. Because that was focused on in both Uglies and Pretties it would have been annoying to have it be that way in this one as well when there are clearly so many other issues going on.

I’m looking forward to Extras, the next in the series. From what I remember when I read it years ago, it has the best story arc.