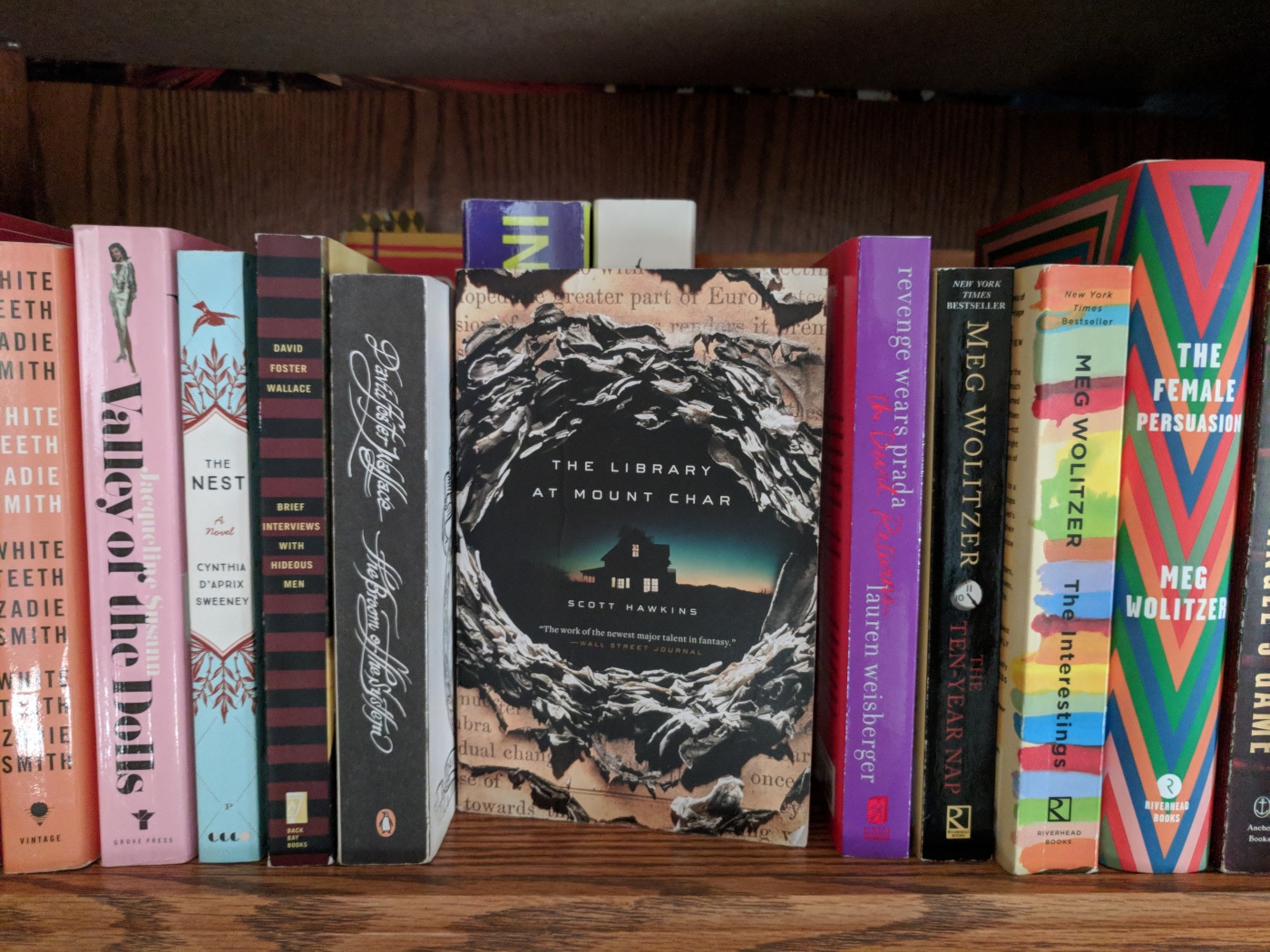 “Carolyn–I need you to go back into America. We need an innocent heart. We will offer it to Nobununga when he arrives. Do you think you can handle that?” ~Scott Hawkins, The Library at Mount Char

The Library at Mount Char by Scott Hawkins
388 pages
Published by Broadway Books
Genre: Fantasy
Rereadability: We probably won’t reread this one anytime soon.
Rating: Pete’s: 3.5 out of 5 stars, Indiana’s: 2.5 out of 5 stars

Spoiler-free review
The Library at Mount Char follows several librarians—people who were forcibly adopted by a man called “Father” at a young age and taught various catalogues about the inner workings of the universe. Father has gone missing, and Carolyn is a librarian with a mysterious scheme that involves a few unwitting outsiders.

Pete: This was a book that both met my expectations and was also completely unusual and surprising. Not always in good ways, but it definitely managed to do something different.

Indiana: I enjoyed how comfortably weird the premise was and how well Hawkins was able to perfectly describe and write characters. As different characters were introduced I immediately felt like I knew them well.

Pete: Characters were definitely his strong suit, Steve and Erwin in particular. For a book with such bizarre characters, he did a good job differentiating them and giving each one distinct dialogue and perspectives.

Indiana: Absolutely. I have to admit I hated the way some of the more violent scenes were written. Also, there didn’t really seem to be a reason for several of them. There is one in particular involving a bunch of dogs that pissed me off . . . especially because in Hawkins’ bio on the back of the book he talks about how much he loves taking care of his foster dogs. I understand that his book doesn’t reflect his lifestyle (at least I hope it doesn’t) but it felt creepy that of all the factoids he decided to include about his life he decided to mention that one.

Pete: It was over the top in an in-your-face kind of way at times. But like all books/shows/movies like this, the shock value wore off quickly since he couldn’t prove that it was anything more than a gimmick. The last third of the book was also exposition-heavy, and it didn’t feel like we learned anything of value. It just slowed things down. I think there’s a really great book here—it’s just bogged down a bit by unnecessary things.

Indiana: Right, it was like he wanted to take his time showing us his master plot so that he could really sell it to us. But if you made it that far through the book, you’re already sold. No need to do a sales pitch. I was hoping that the plot would move forward, but it wasn’t until the very last 30 or so pages that things actually happened. Hawkins is a concise writer and The Library at Mount Char is definitely a strong book, but it could have been a lot better had an editor came in and cut it down.

Pete: And there’s room for a sequel, too—but I don’t know if that’s something I’d read. He shows his hand a little too much at the end to me. I didn’t need answers, I just wanted to see what happened.

One thought on “Team Review: The Library at Mount Char”