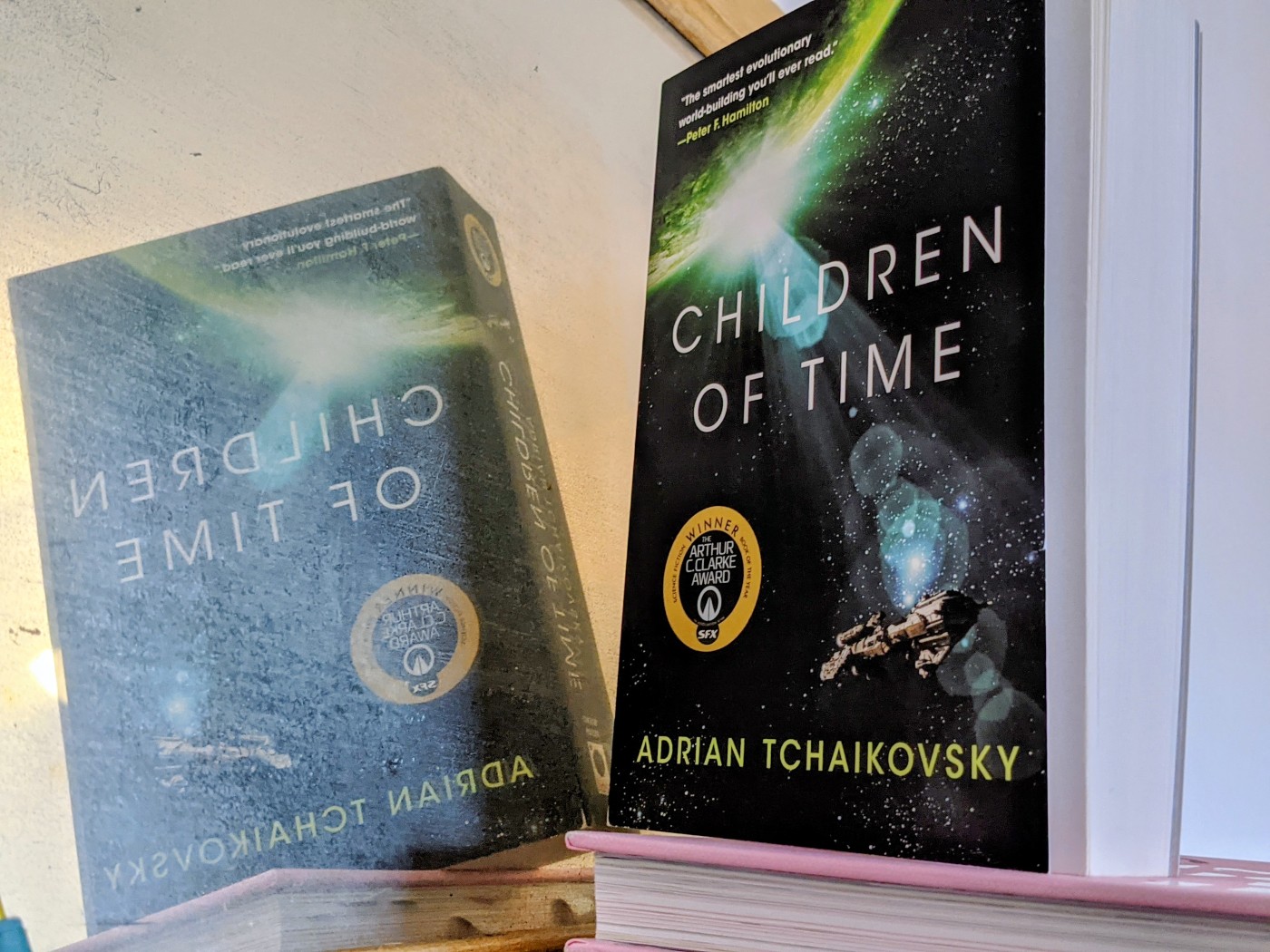 “The face of Doctor Avrana Kern—whoever and whatever she truly was—flickered and ghosted on their screens, sometimes inhuman in its stoic patience, at other times twisted by waves of nameless, involuntary emotions, the mad goddess of the green planet.” ~ Adrian Tchaikovsky, Children of Time

Children of Time by Adrian Tchaikovsky
600 pages
Published by Orbit, 2015
Genre: Sci-fi
Re-readability: I will probably come back to this one someday.
Rating: 4.5 out of 5 stars

The last remnants of the human race left a dying Earth, desperate to find a new home among the stars. Following in the footsteps of their ancestors, they discover the greatest treasure of the past age — a world terraformed and prepared for human life.

But all is not right in this new Eden. In the long years since the planet was abandoned, the work of its architects has borne disastrous fruit. The planet is not waiting for them, pristine and unoccupied. New masters have turned it from a refuge into mankind’s worst nightmare.

Now two civilizations are on a collision course, both testing the boundaries of what they will do to survive. As the fate of humanity hangs in the balance, who are the true heirs of this new Earth?

This eerie, millenia-spanning sci-fi both gave me the creeps and warmed my heart.

The publisher is timid in their synopsis, and it’s worth noting (both as a phobia warning and to fully understand the setting) that this book is about humans attempting to claim a planet entirely covered by a civilization of thinking, feeling spiders about a meter long. If you are afraid of spiders, this book is probably not for you.

What I enjoyed most about this book was the incomprehensibly massive scale. We get to watch a planet of spiders evolve over millennia, from the stone age to space travel. We see a scientist go from the head of a terraforming uplift project to a veritable deity. Through the eyes of one classicist and linguist, we watch several generations of the last humans in the universe on a long-voyage ship. While these ideas aren’t entirely new to sci-fi, they made me feel an aching loneliness and terror as I put myself into the miserable lives of these desperate humans—and desperate spiders.

Yes, nearly half of this book is told from the perspective of the spiders. More specifically, Tchaikovsky shows us one line of spiders (all named “Portia” for simplicity’s sake) as they evolve rapidly, aided by a human-made virus. These various Portias lead her people in religion, war, and science, all while interpreting doctrines given to them by The Messenger—the lone human scientist in charge of the uplift project.

I was not a huge fan of the spider chapters at first—I just wanted to get back to the classicist, Mason Holsten, and the engineer, Isa Lain, who enter and exit cryosleep over the course of thousands of years while they attempt to land on the planet of the spiders. But after a point, I began to care about the spider characters just as much. While the first third or so of the book has its revolting arachnid moments, Tchaikovsky treats the spiders more or less like people, and by the end of the book it is easy enough to imagine them as a civilization of humans.

Though this is the sort of sci-fi that comes with a good amount of actual science and futuristic technology, it’s paced very well, and the endlessly deep secrets of the spiders and their deity kept me fascinated.

My only complaint is that I was entirely perplexed by Holsten being the main character, rather than the brilliant, sharp-tongued Lain. As two of the only humans to witness the past several thousand years of human history, they have both seen quite a bit. But Lain is a far more active character, and her role in humanity’s mission to find a new home is much more crucial. Holsten feels like a reader stand-in. Fortunately, Lain is present for enough of the story that I could almost pretend she was the main character.

If you enjoy grand, ambitious sci-fi and don’t mind reading about thousands of giant spiders, I highly recommend this wonderful adventure.

4 thoughts on “Review: Children of Time”