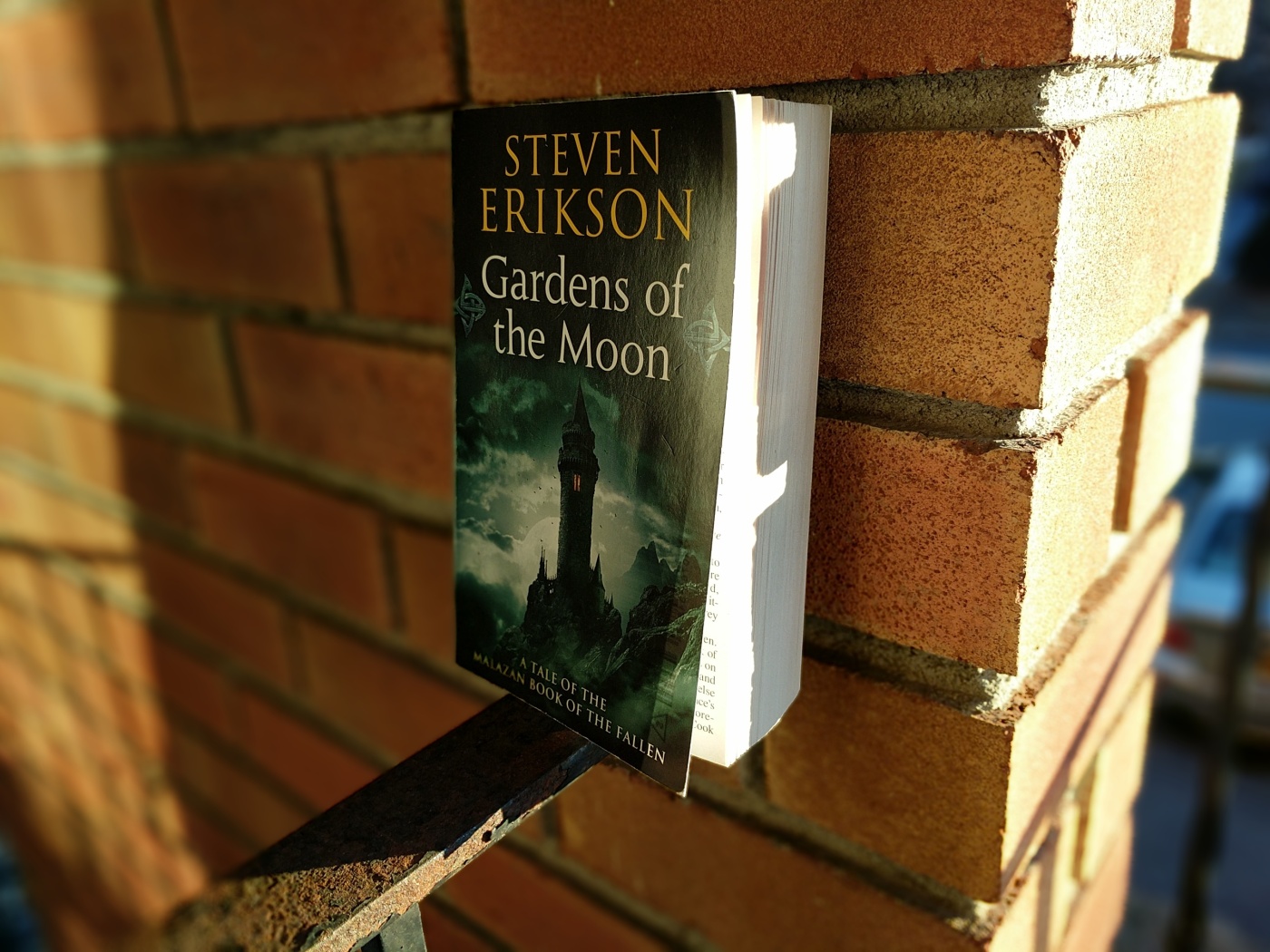 “Slowly, Whiskeyjack studied each man in his squad. He saw the caring in their eyes, the open offer to the friendship he’d spent years suppressing. All that time pushing them away, pushing everyone away, and the stubborn bastards just kept on coming back.”  ~ Steven Erikson, Gardens of the Moon

Gardens of the Moon (Malazan Book of the Fallen #1) by Steven Erikson
657 pages
Published by Tor, 1999
Genre: Fantasy
Re-readability: If the rest of the series holds up, I’ll probably be reading this one again.
Rating: 9 out of 10

I have heard many things about Steven Erikson’s Malazan Book of the Fallen series, both from friends and from r/Fantasy. Very few people seem to dislike it, and many claim it’s their favorite fantasy series. One thing that absolutely everyone says is that it’s incredibly complicated and that the first book is the roughest of the ten.

If Gardens of the Moon was rough, then I am in for something amazing.

I often struggle to follow complex plots with large casts. That isn’t to say that I don’t like them—sometimes I enjoy a plot that’s a bit harder to grasp. Though the consensus seems to be that Gardens of the Moon is extremely dense and complicated, I didn’t get that feeling. It’s a book with a lot going on, but the well-written characters are distinct, and their individual plots fit together nicely.

Gardens of the Moon begins with a world in turmoil. The Malazan Empire has spread itself thin in its occupation of the former Free Cities of Genabackis. A group known as the Bridgeburners, soldiers of the Empress, have been reduced from hundreds to a few dozen in a massive siege. The Bridgeburners were loyal to the former emperor, and the Empress is sending some of them on what may be a suicide mission to the Free City of Darujhistan.

There are too many characters to get into the individual arcs, but my favorites were Paran and Tattersail. Tattersail is a powerful sorceress whose place in this changing world is unclear. Paran is the recently appointed captain of the Bridgeburners who manages to be an endearing hero despite the world’s brutality. Though he doesn’t realize it at first, his position is crucial to the plans of the gods, and he soon finds himself at the mercy of strange forces.

This is epic fantasy at its most epic. Gods make regular appearances, and deadly beings from thousands of years ago are returned to life to do the bidding of others. There are somewhere between three and eight unique factions at war—it’s hard to keep track. This book reads as if it were the last book in the series, not the first. The characters know each other well and have deep backstories, and everything escalates at an alarming speed.

I’ve never read a fantasy anything like this one, but I enjoyed every page of it. Excellent characters, rich worldbuilding, and a breakneck plot—I’ll be picking up the sequel as soon as I can.