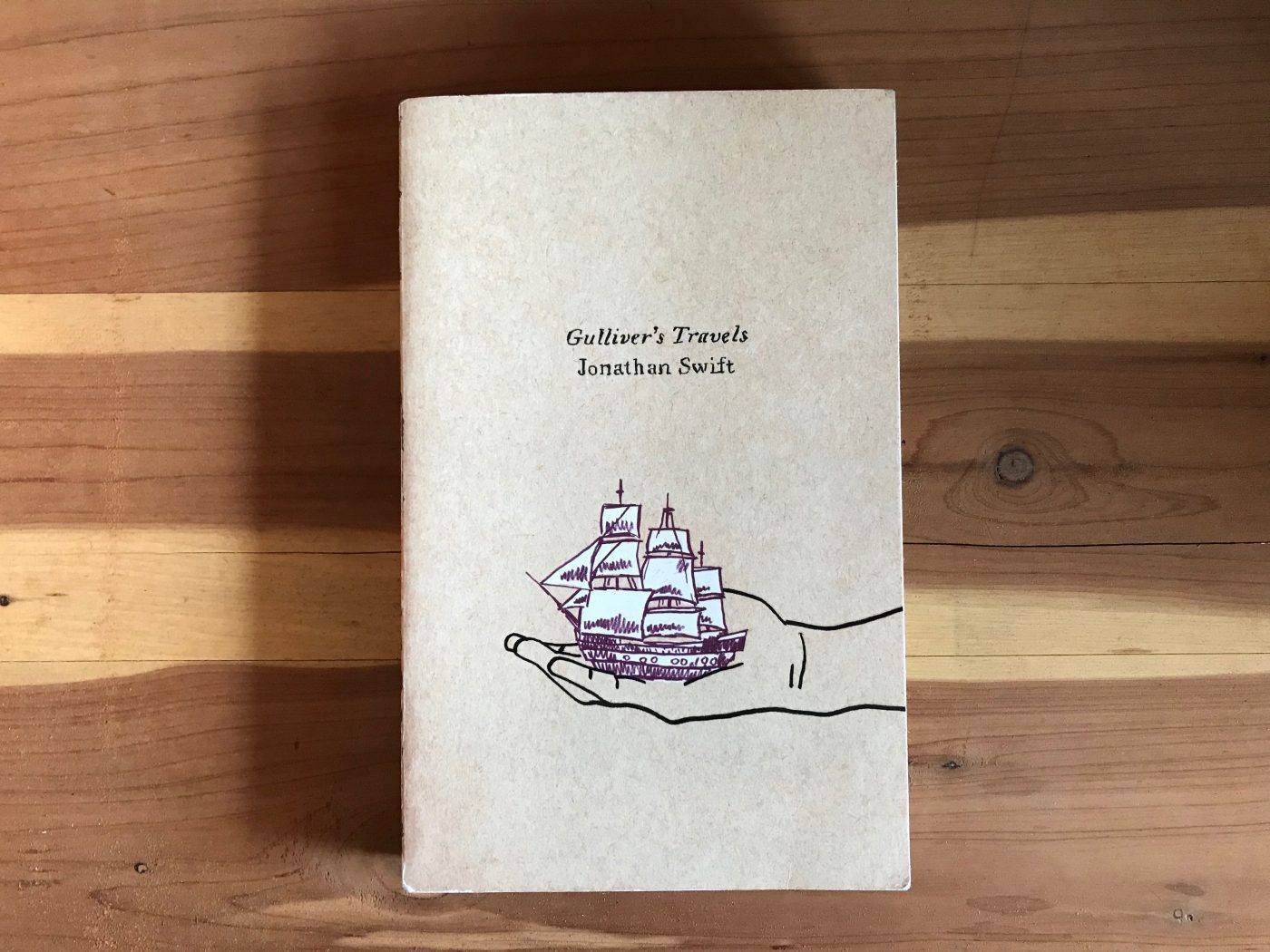 “He was perfectly astonished with the historical account gave him of our affairs during the last century; protesting “it was only a heap of conspiracies, rebellions, murders, massacres, revolutions, banishments, the very worst effects that avarice, faction, hypocrisy, perfidiousness, cruelty, rage, madness, hatred, envy, lust, malice, and ambition, could produce.” ~ Jonathan Swift

Gulliver’s Travels by Jonathan Swift
310 pages
Genre: Fiction, classics
Published by HarperCollins, first published in 1726
Rating: 3.5 out of 5 stars
Re-readability: I’m not sure that I’ll be taking this adventure again.

The sensationalist satire, weird wisdom, and strange settings found in this classic made it a fun, if not bizarre, read.

Lemuel Gulliver starts out as a physician on a ship. He’s gone to sea to make more money for his wife and children, but the ship that he’s on gets wrecked and he washes up on a foreign land. As in the classic illustrations that you’ve probably seen, he’s tied up by the little people of the land known as Lilliput. After much discussion, he learns to communicate with them and live in a sort of peace, helping them map out their lands and with other odd things. At one point the empress’s apartment catches on fire and Gulliver puts it out by peeing on it.*

One politician in the land hates Gulliver and plans to accuse him of high treason. Gulliver escapes to a nearby land before securing a way home. Of course, he doesn’t stay there for very long. Leaving his wife and kids is a reccuring theme in the book. He usually claims that he only leaves so that he can bring back extra money for them, but after the second or third time, you get the sense that that’s what he tells himself. Indeed, he goes on many adventures to distant lands and is away for sometimes five or six years.

I was not a fan of every land he want to. Indeed some were boring or disgusting, particularly the one where everyone was enormous and he was tiny, called Brobdingnag. However, others were wonderful and fun to explore, even through the eyes of an unreliable narrator like Gulliver. Laputa, the flying island, felt like an alien culture. The people there have pages to whack them and keep themselves on track because they get distracted from reality while thinking up their “intense speculations,” as Swift writes.

I also enjoyed Glubbdubdrib, a land where sorcerers and magicians can bring historical figures back to life for a little while. Gulliver asked them to call up Hannibal, Caesar and Brutus among others. Perhaps the best land, and no doubt Gulliver’s favorite, was the land of the Houyhnhnms, horse creatures that are wise and can talk. They have taken over the Yahoos, a humanoid monkey-like breed, who act like animals. Gulliver tries to convince them that he’s not anything like the barbaric Yahoos; “My master heard me with great appearances of uneasiness in his countenance, because doubting or not believing, are so little known in this country that the inhabitant cannot tell how to behave themselves under such circumstances.”

It’s a bit like the garden of Eden and the Yahoos are like the sinful and simple humans who mess everything up.

Gulliver has to explain war to the Houyhnhnms along with a host of other terrible things about his world; “Poor nations are hungry and rich nations are proud; and the pride and the hunger will ever be at variance. For these reasons, the trade of a soldier is held the most honorable of all others: because a soldier is a Yahoo hired to kill in cold blood as many of his own species; who have never offended him, as he possibly can.”

Eventually, Gulliver is forced to go back to Europe. But he’s forever obsessed with the wisdom and peaceful nature of the Houyhnhnms. He keeps himself distant from his wife and kids, who he views as all too similar to the violent and offensive Yahoos. He vows to treat horses with the utmost respect and curses the way that Yahoo-like people have control over them in Europe. It’s a strange ending to a strange book.

*It must be said that Gulliver’s need to pee and poop are woven into many scenes through the book. It’s almost like a kindergartener snuck in and wrote these scenes, but they’re overlookable.

“She sees how she, Agnes, must remain calm, steady, must make herself bigger in a way, to keep the house on an even keel, not to allow it to be taken over by this darkness, to square up to it, to shield Susanna from it, to seal off her own cracks, not to let it in.” ~ Maggie O’Farrell
“You’re shaking,” he said.
What I enjoyed most about this book was the incomprehensibly massive scale. We get to watch a planet of spiders evolve over millennia, from the stone age to space travel. We see a scientist go from the head of a terraforming uplift project to a veritable deity. Through the eyes of one classicist and linguist, we watch several generations of the last humans in the universe on a long-voyage ship. While these ideas aren’t entirely new to sci-fi, they made me feel an aching loneliness and terror as I put myself into the miserable lives of these desperate humans—and desperate spiders.
“The peculiarity of being a writer is that the entire enterprise involves the mortal humiliation of seeing one’s own words in print.” ~ Joan Didion
Top Ten Tuesday: Favorite Books with Good Love Stories
“I leap out of the water. But when I come down, the shark is right in front of me. I jump again, looking for an escape." ~Rosanne Parry
“The thought became clear and clean: it would take just some small strokes of pen to transfer these doodled drafts onto the official blue index cards and he could pepper the dictionary with false entries. Thousands of them—cuckoos-in-the-nest, changeling words, easily overlooked mistakes. He could define parts of the world that only he could see or for which he felt responsible.” ~ Eley Williams
January ended up being a pretty great month of reading for both of us. Hoping February will be the same!