The Farthest Shore by Ursula K. Le Guin — 4 out of 5 stars

Senlin Ascends by Josiah Bancroft — 4.5 out of 5 stars

Edgedancer by Brandon Sanderson — 3 out of 5 stars

Peace Like a River wasn’t finished because 20 pages in I knew that it was not a book for me. Plot, characters, and writing all rubbed me the wrong way. The Poisonwood Bible also didn’t work out for me. The writing was excellent, but I wasn’t intrigued by the story. I’m working on The Hare, but it’s not going great. Can you tell I’m in a major reading rut?

Howl’s Moving Castle by Diana Wynne Jones is something I’ve wanted to read for years. I’m looking forward to a light fantasy book. The Haters by Jesse Andrews is one that caught my eye recently — Indiana and I will be doing a double review of that one. The Goblin Emperor by Katherine Addison is another lighter fantasy that I’ve heard nothing but good things about. Indiana insisted that I read Ian McEwan’s Nutshell, and I’m already halfway through it. And I already finished The Keep by Jennifer Egan, and we will be posting a double review shortly! 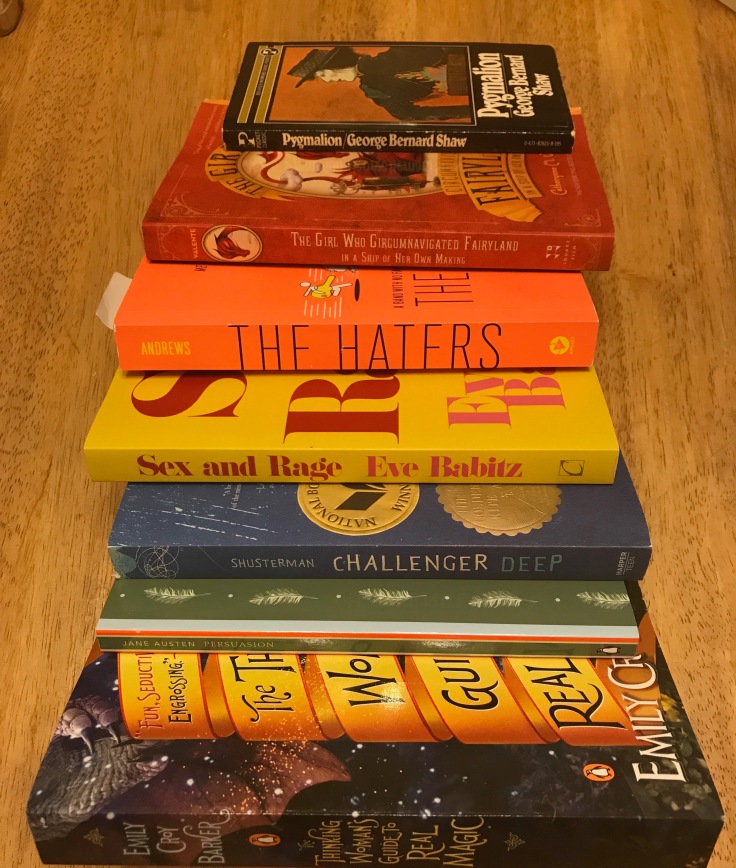 Magpie Murders by Anthony Horowitz —  3 out of 5 stars

The Last Days by Scott Westerfeld —  3 out of 5 stars

The Alchemist by Paulo Coelho —  4 out of 5 stars

Percy Jackson and the Olympians: The Lightning Thief by Rick Riordan —  4 out 5 stars

Madness and Civilization by Michel Foucault

For some reason, I seem to be delving more into fantasy this month. I’m finally getting around to reading The Thinking Woman’s Guide to Real Magic by Croy Barker. It’s been on my list for years, but I’ve just pushed it off until now. Then I’m getting into The Girl Who Circumnavigated Fairyland in a Ship of Her Own Making by Catherynne Valente, which is like a modern day Alice in Wonderland and/or Wizard of Oz. Then I’ve got classics Persuasion by Jane Austen and Pygmalion by George Bernard Shaw, both of which I’ve somehow never read. My two young adult picks for this month are Challenger Deep by Neal Shusterman and The Haters by Jesse Andrews. Shusterman’s book sounds like it takes an in depth look at mental illness and Andrews’ book is about jazz camp escapees. I picked up Sex and Rage by Eve Babitz on a whim, but it sounds like something akin to Valley of the Dolls.