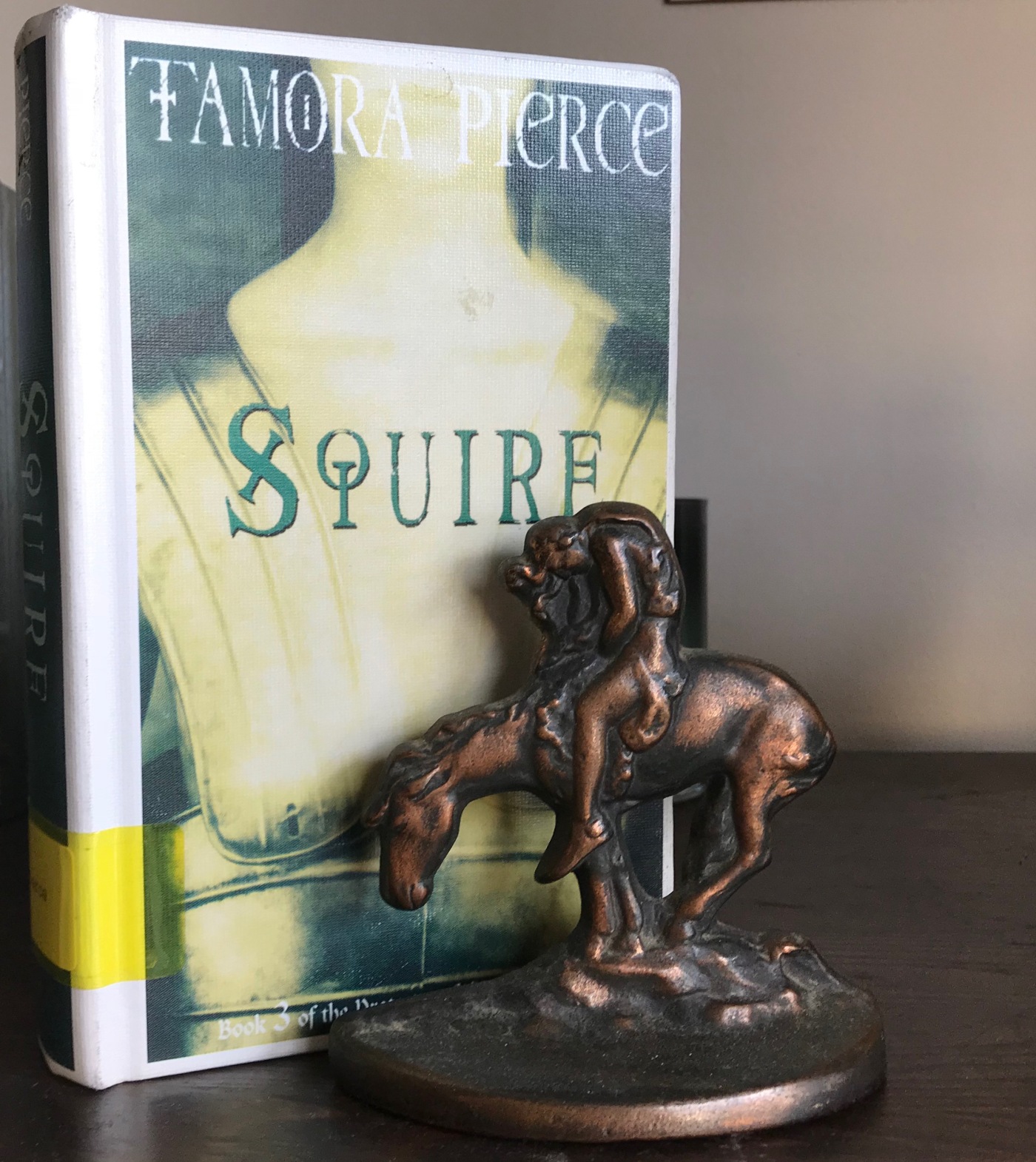 “When people say a knight’s job is all glory, I laugh and laugh and laugh. Often I can stop laughing before they edge away and talk about soothing drinks.”

Squire, Book 3 of the Protector of the Small Quartet by Tamora Pierce
380 pages
Genre: Young Adult, fantasy
Published by Random House, 2001
Rating: 3.5 out of 5 stars
Re-readability: I don’t think I’ll be coming back to this one.

This book is a huge leap from the first two. Not just in the sense that the protagonist, Kel, finally gets to become a squire, but because this is the first book in the series where you really notice that she’s become a teenager.

Obviously, because she’s busy trying to become a knight, fight off misogynistic squires, and protect the kingdom from mythical bandits, she’s not exactly a normal teen.

The book picks up right where Page, the second in the series, left off. Kel and her classmates have just finished up with the last round of tests which qualify them as squires and they’re awaiting knights to take them into their employment for the next two years or so.

While Neal, Kel’s best friend, is employed by Kel’s hero, Alanna, Kel finds a perfect match in Lord Raoul. He is a bit of a legend in the kingdom and it’s rare for him to take on a squire. But he gets along very well with Kel and turns out to be an excellent teacher – quite a 180 from her previous teacher, Lord Wyldon.

Kel spends much of the year fighting bandits, centaurs and a few unexpected creatures. True to Kel’s nature, she ends up saving a baby griffin, deadly animals whose parents will hunt the scent of the one who touches the baby and kill them instantly. Oh, and taking care of the griffin is no walk in the park. Kel ends up with scarred hands and head within the first day or two.

Meanwhile, a longtime friend turns into something much more than a friend. It takes stiff Kel to come around to the idea at first; after all, she grew up in a culture that valued the one’s ability to show no emotion. But eventually, she gives in whole heartedly.

Pierce clearly states her opinions on sexual freedom and choice when Kel’s mother tells her that it’s Kel’s right to “bed” whoever she wants. Her mother also recommends taking a charm to prevent pregnancy. It was interesting to read that progressive opinion within the context of a society that seems so traditional. Though I suppose that’s the whole point of Kel’s story; that it’s not impossible for women to do the things that man can do.

Squire was a strong continuation of the series. Unfortunately, I did feel like it could have been a little shorter— which is a bit of a bummer because in the acknowledgements, Pierce thanks J.K. Rowling for convincing American children’s book publishers that kids want longer books. The first and the second books were under 300 pages, while the third clocks in at 380 pages. There’s no doubt that plenty happens in Squire, but I missed the crazy fast pace of the first two.

One thought on “Review: Squire”